100th Anniversary of the Bluenose

March 26th marked the 100th anniversary of the launching of the Bluenose. The story of this famous boat should roll of the tongues of every Canadian. This vessel combined will, technical mastery and raw talent on many levels. It was born in an era when people just did something and didn’t wait for multiple government approvals and endless paperwork.

The Canadian Geographic has recently published a wonderfully written story about the ship. Most should know that she was specially built to be fast and to be a working schooner. The Canadian Geographic story includes anecdotes from different points of view and rightly points out the symbolism of the Bluenose on multiple levels. Especially interesting to me is that she was specifically built to win, and her design didn’t just come from the hand of experience, but mathematics as well. Her hull shape and the materials used to build her were the product of science. 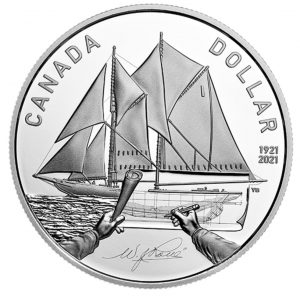 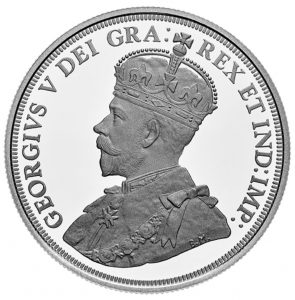 She was fast enough to beat her American challengers and fast enough to outrun German boats. We can hope that the example of her ruin on a tropical reef will be a reminder to never let such a future treasure be abandoned. The Bluenose earned the moniker of “highliner” due to her ability to pull in a sizeable catch of cod.  I’m sure every boater has pleasure in seeing her on our dime. King George VI will grace the other side on a special run of the centennial 1921 – 2021 dime honouring the Bluenose. A proof silver dollar will be run by the Mint that features King George V.

← Spring in the Shops
Family Movies and Cottage Life →