A Man and His Toys

Does the child in us ever leave? For some, the childhood passions just get bigger. Richard Tatley, the author of the Steamships of the Muskokas, is not only passionate about steamships, but also model railways. 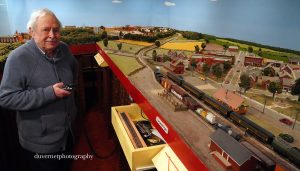 Richard has spent 16 years building a model electric railway system in his basement. Richard explained that the extensive rail system was constructed with help of the Muskoka model rail club. His rail system is like a miniaturized world, with complete villages, water ports, bridges, harbors and a soundtrack to boot. 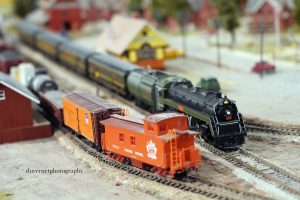 I forgot to ask Richard the total length of the track, but it took several minutes for the engine to make its way around the whole track. Richard based the names and character of the villages on his boyhood experiences. 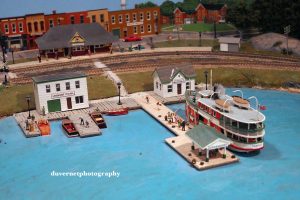 When Richard takes out the remote control, he is transformed into the serious child of passion that it takes to create such a masterpiece. With miniature cars, churches, tiny buildings he has built, passenger cars, school houses, store fronts, rolling hills, waterfront parks and more. This is no fake, look alike. The wheels on the trains move, the engine sounds and toots are on cue. There are cows, horses and sheep in fields, streams and trees modified for scale effect, hydro lines and poles. Literally no detail has been missed. Creative choices for names on the buildings, towns and trucks are fun. Richard generously likes to share his passion for the model train. The child never leaves us!