A Ride in an Electric Boat

I finally had the opportunity to get a ride in Gladys, the electrified Greavette Dispro. This is the 1947 Disappearing Propeller boat, built in Gravenhurst, that had her Caron engine removed and replaced with an electric motor. All the calculations were done for needs of power, battery drain and speed, based on the hull speed of the 18’ craft. A Dispro maxes out at a bit more than 6mph before climbing its own wake, which is known as hull speed. 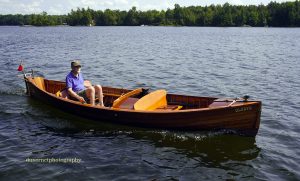 Owner Tom Wood had launched Gladys and offered to take me for a ride in his area of Lake Rosseau, at the south end of the lake. In a “normal” Dispro, you need a battery for ignition and possibly spark; you need gasoline, of course, water cooling, pumps and pulleys or gears to connect all the moving bits. Gauges, switches and levers are also needed to keep the air and fuel mixture optimal and the timing of the spark and cylinder movements. 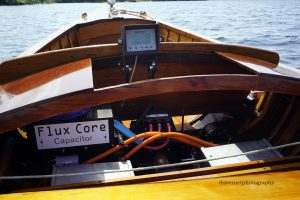 In an electric motor, you turn on the battery to warm it up a bit (not so much of an issue in 25C weather), point where you want to go and crank up the power. The motor gives a slight whur noise and gradually smooths out to almost nothing. In fact the sound of the waves against the boat was louder than the engine. The engine was “revving” at 675 rpm, which gives somewhere between 5.5 and 6mph. It felt just slightly slower than a two cylinder Greavette Coventry Victor running at a fast cruising clip. One of the cool features of this setup is reverse! Absolute heresy in the Dispro world, but the electric Dispro has brought this 106 year old invention into a new era.