A visit to Breen Boats near Rockwood, Ontario.

Many thanks to our secret sleuth, N.H., and to Peter Breen and his son Jeff for providing photos and infromation on several of the extraordinary projects underway at Breen Boats. Peter’s shop is the first on the agenda for the ACBS (Toronto Chapter) spring tour of Ontario boat shops.

“I had the special opportunity to see probably one of the most significant boats built for use in Muskoka in the past 30 years;

The signature project being delivered this spring is a 31’ Bob Tail Torpedo Hull Gentleman’s Racer, based from a 1920s design, style, and hardware.

This is an extremely complex hull to construct because of the Torpedo hull; 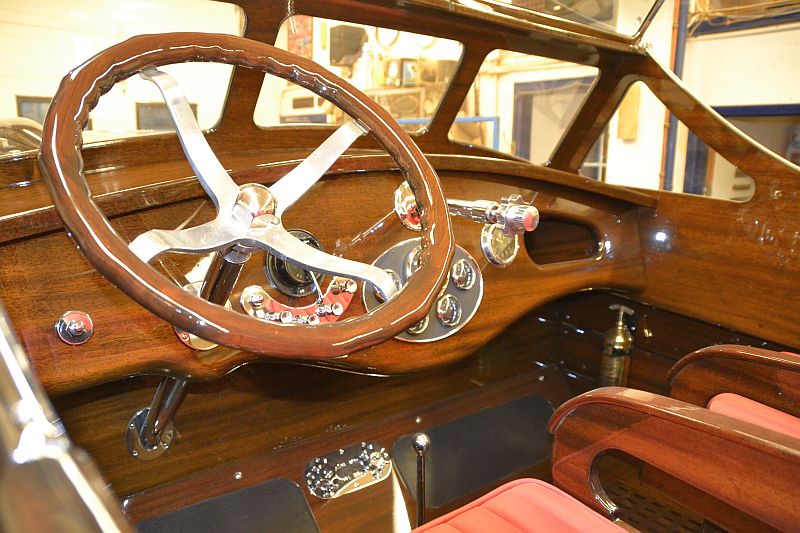 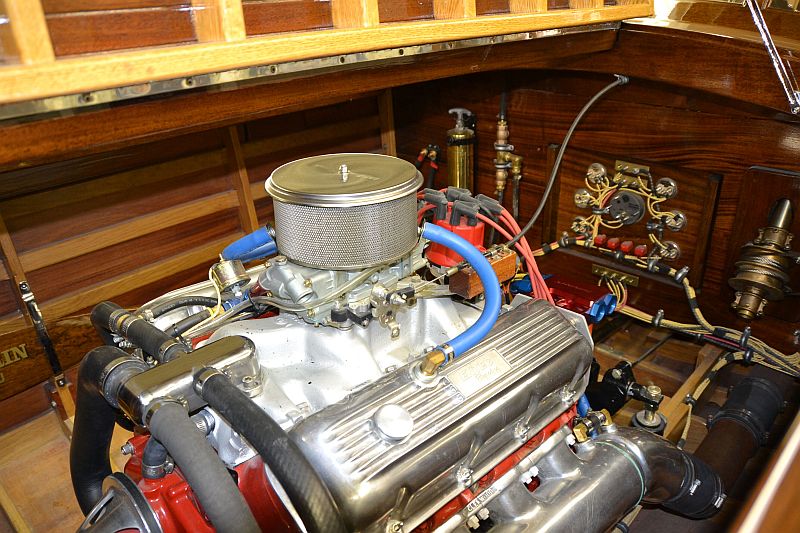 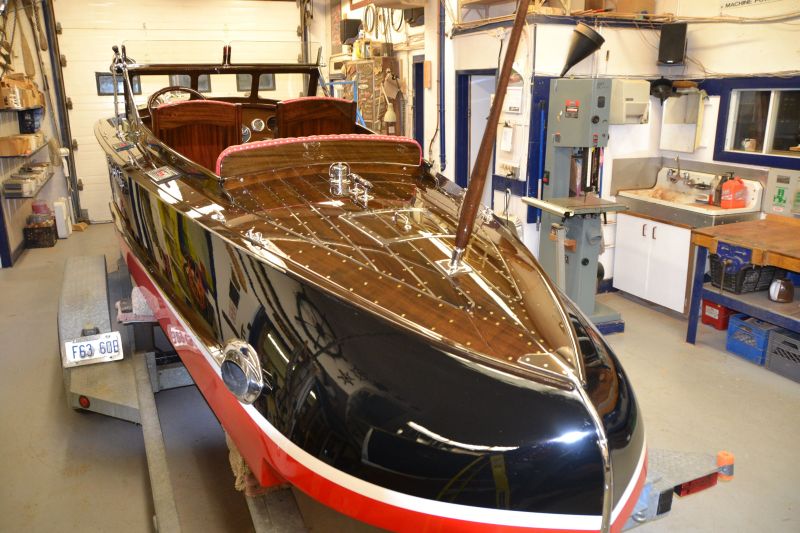 Jeffrey Breen has just finished a 29ft Breen Gentlemans Racer in the Ditchburn style that is just spectacular in its. lines. The Ilmor engine will really get this boat up to some significant speeds. Features include dovetail hatches, elaborate inlay work in the cockpit, self-standing bucket seating, and period sand-casted hardware. 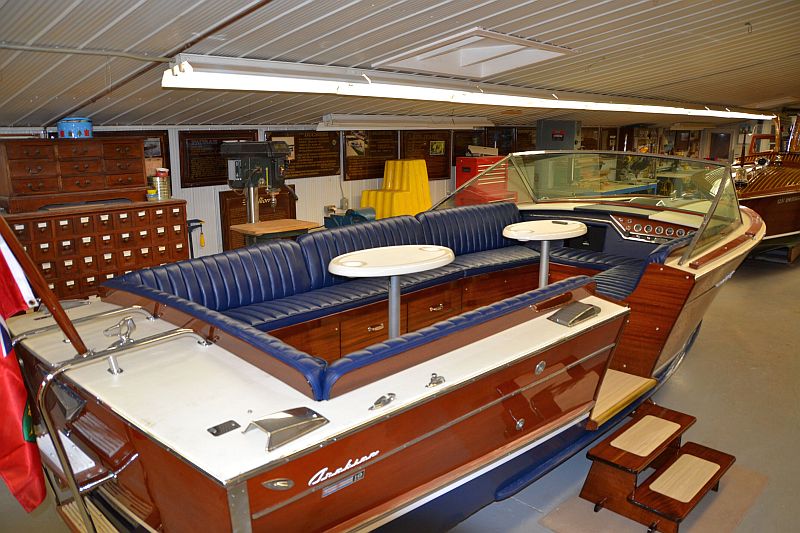 I also saw a really interesting Century Arabian (above) that has been restored complete with wifi, built in cooler, a superb sound system and the finest blue upholstery you’re ever going to find.

In fact the boat is so luxurious  it has a living room feel;

It is actually a very elaborate bar that comes with a complete cover to protect the boat against the elements for use on an island on Georgian Bay.

The Grand Duke is owned by boat collecting pioneer Jim Grand, whose family has owned it since new. it is a rare mahogany planked boat with a lots of seating and a curved glass windshield…a spectacular boat in its time. 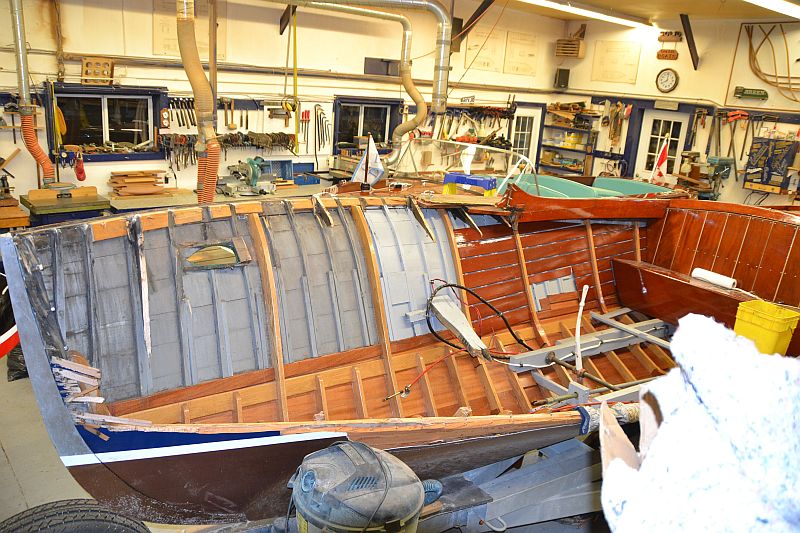 There was also a lesson in keeping your boat insurance up to date (above) as there was a 30ft Ditchburn boat that was restored last year; it was returned to Peter Breen three weeks ago after the wet snow on the storage building  roof buckled under the weight and crumpled the forward ten feet, as well as other areas of the boat;  I am sure Peter and his staff will have this looking perfect in due course.

Also in the shop is Hope II,  a 24 foot WJ Johnson triple cockpit with a 5.7 litre Mercruiser engine for power. This is a really spectacular boat.

The Ditchburn Viking 27 foot model was the first production built step hull in the world. Ponder is one of these boats; it features a 4 inch step, and is a wonderful boat recently refreshed. Also on site, is Lady Eaton’s Viking, Mint Julep. 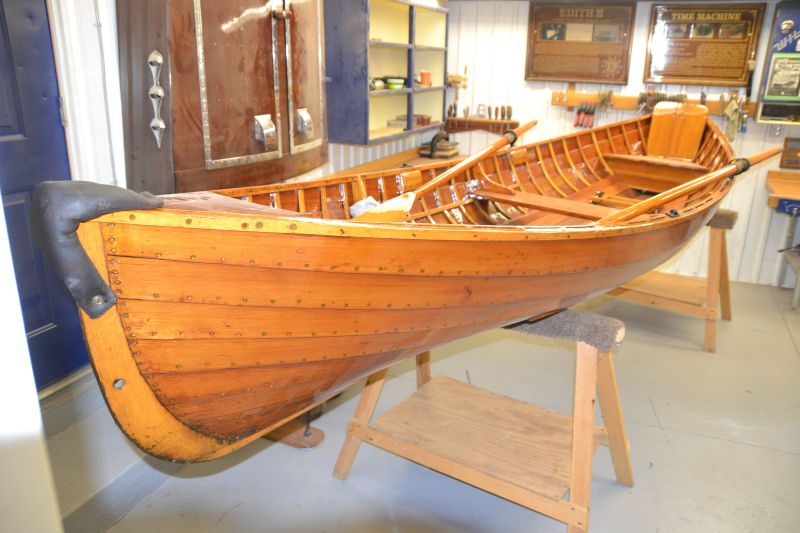 There was also a Matheson lapstrake 16ft row boat (above) that was beautifully varnished and ready for the water.

Also in was a 28 foot Breen Gentleman’s racer  and a 28 foot Ditchburn triple cockpit for a refresh of the varnish finish.”

Enjoy the photos below. 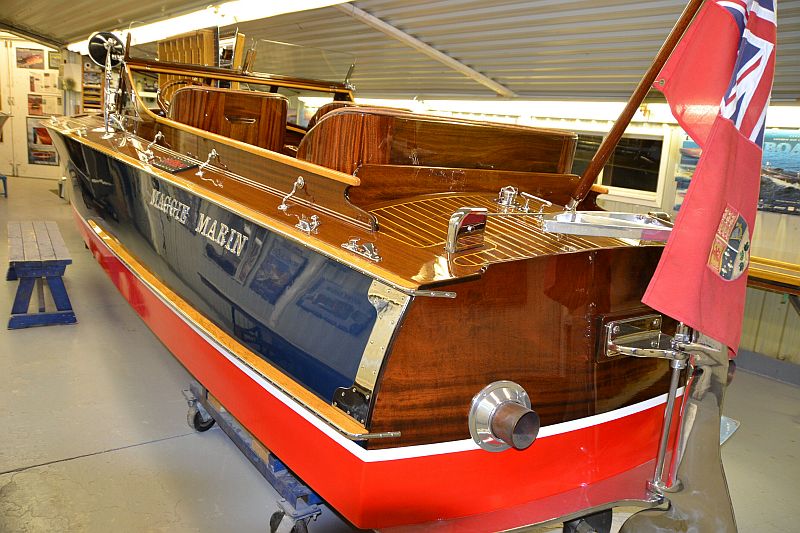 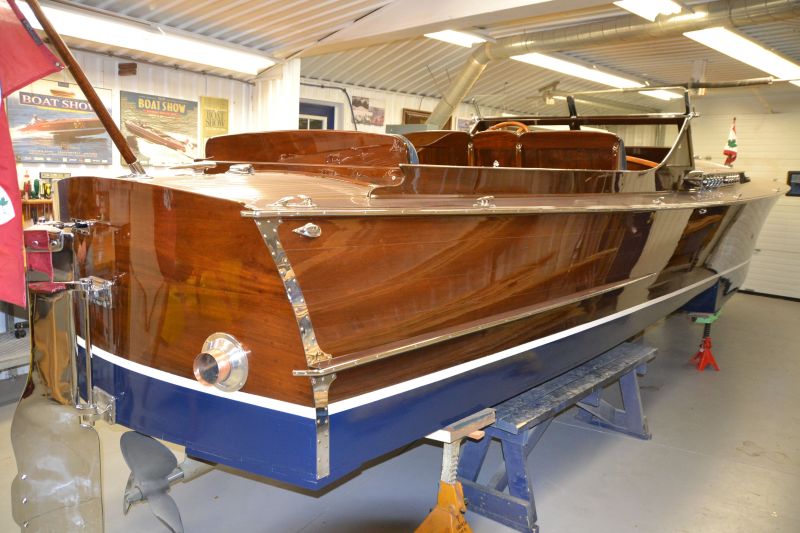 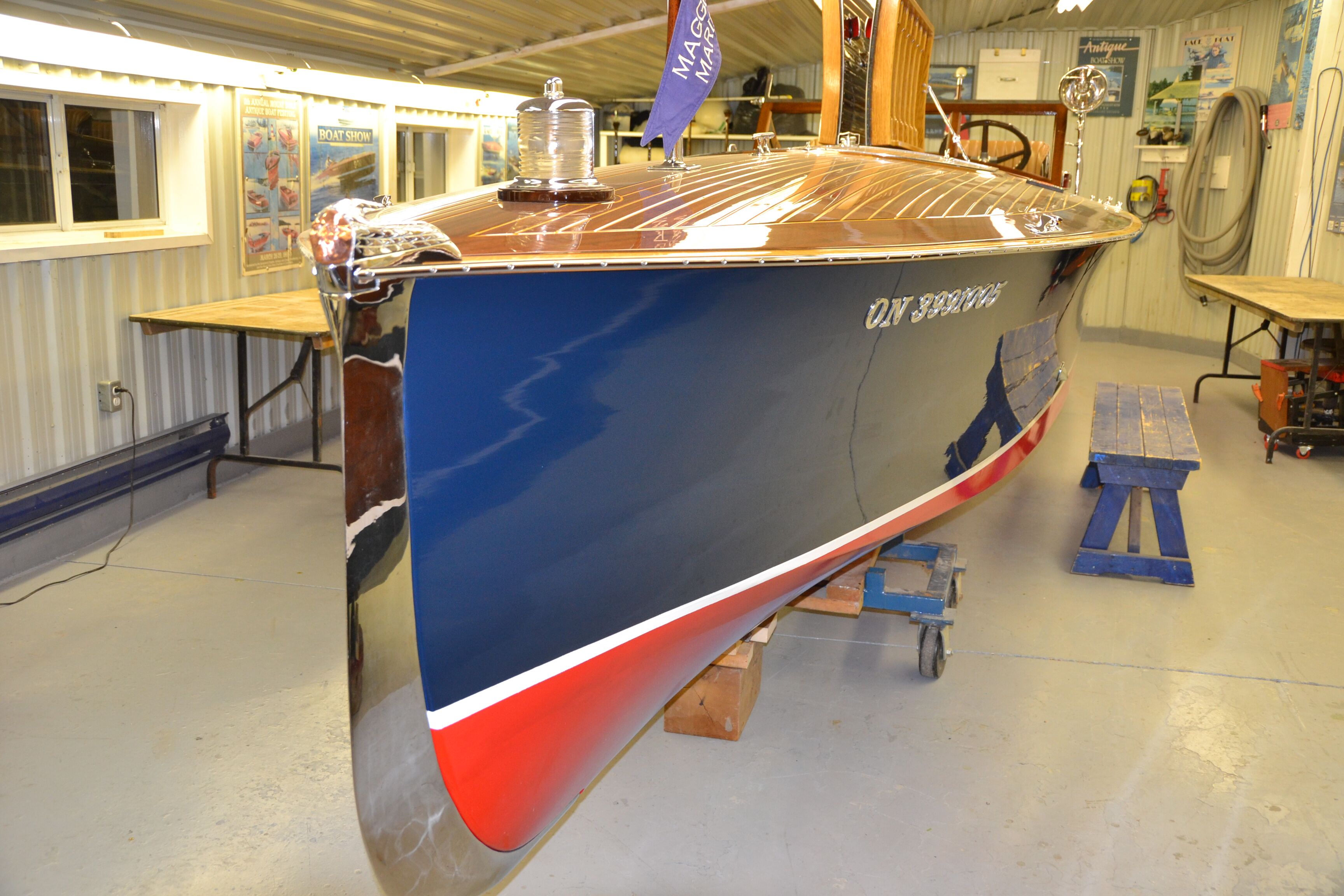 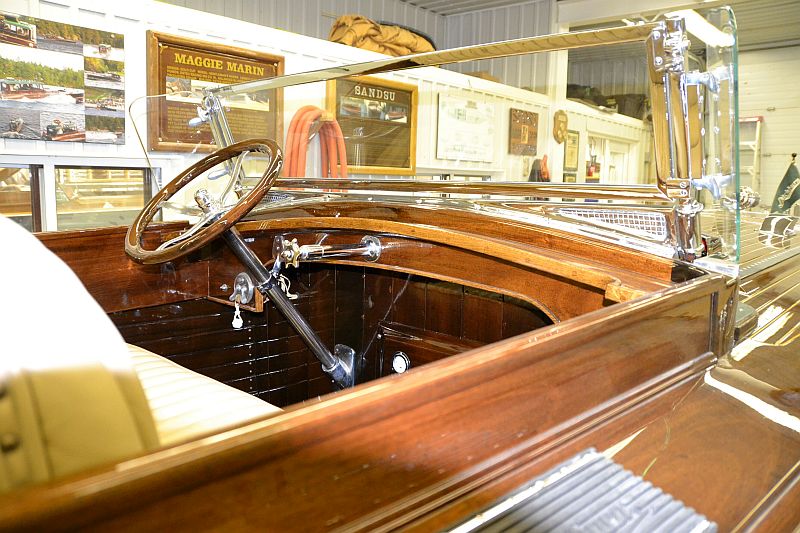 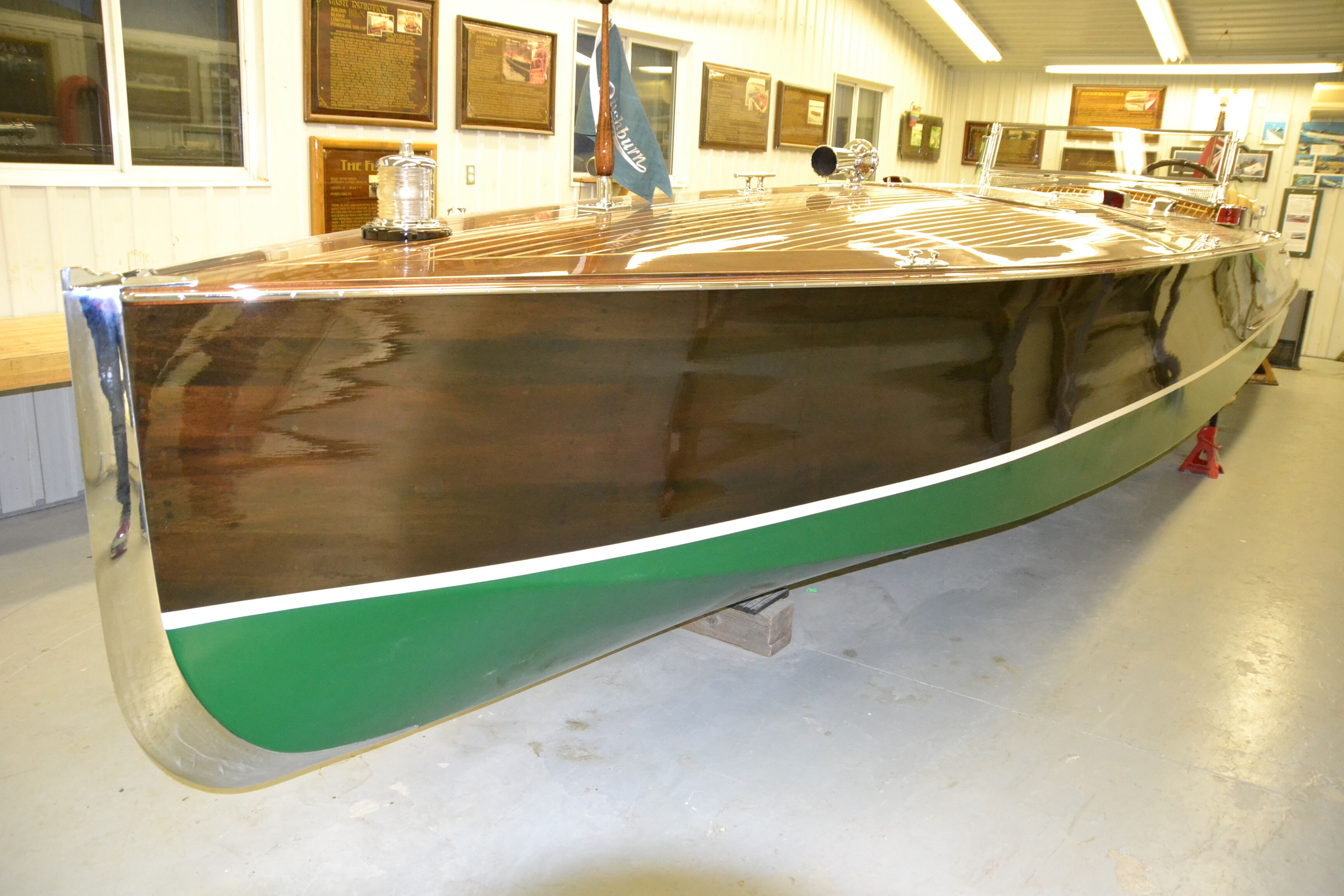 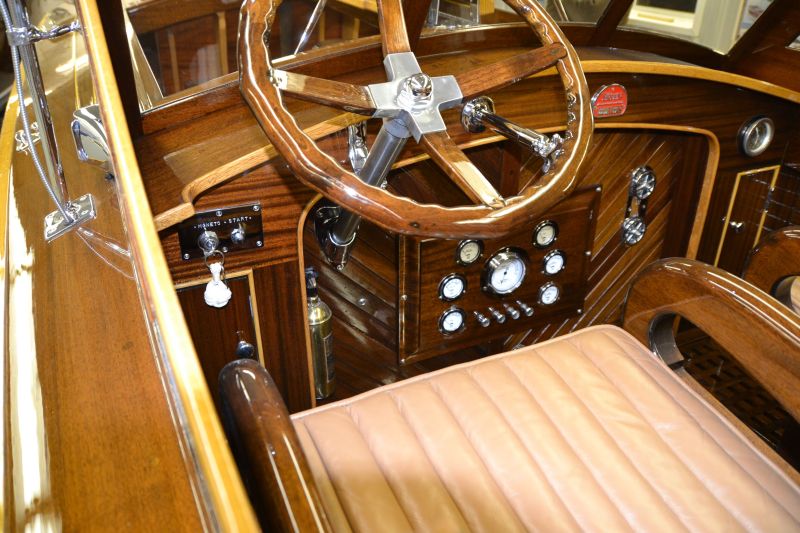 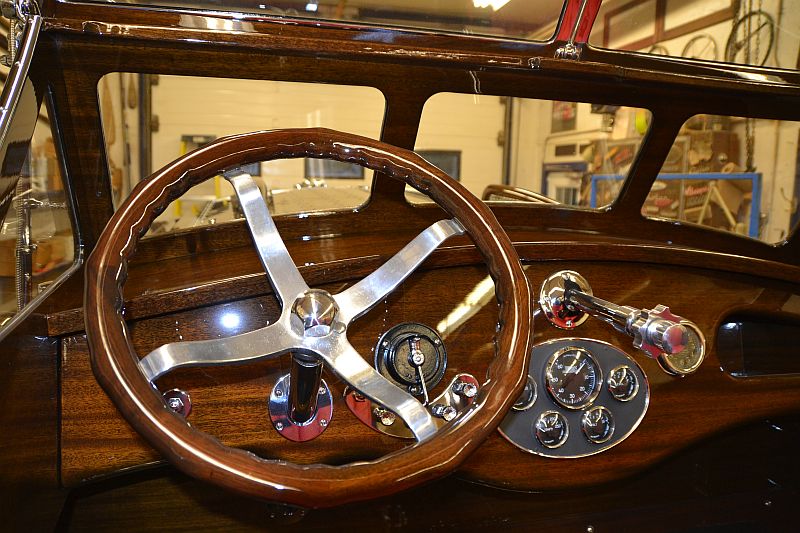 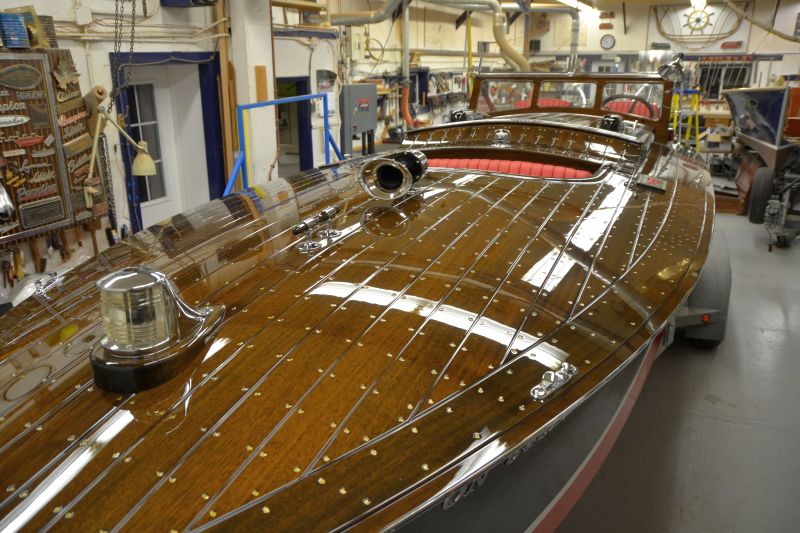 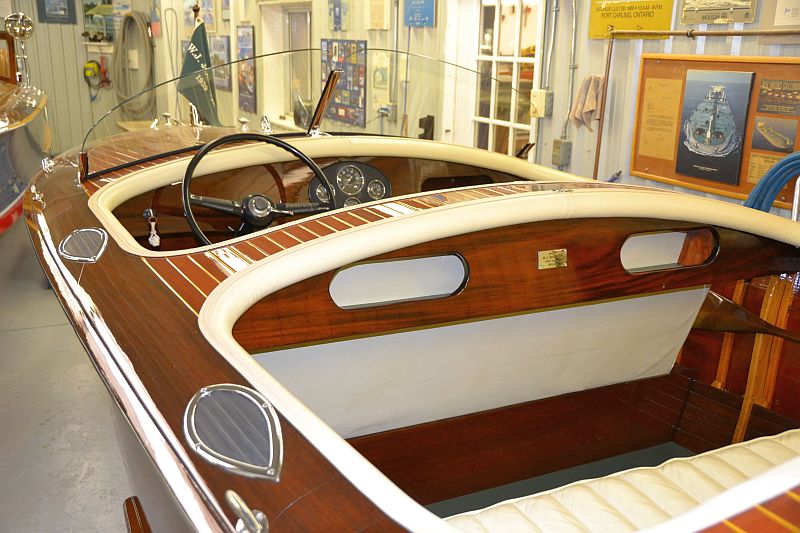 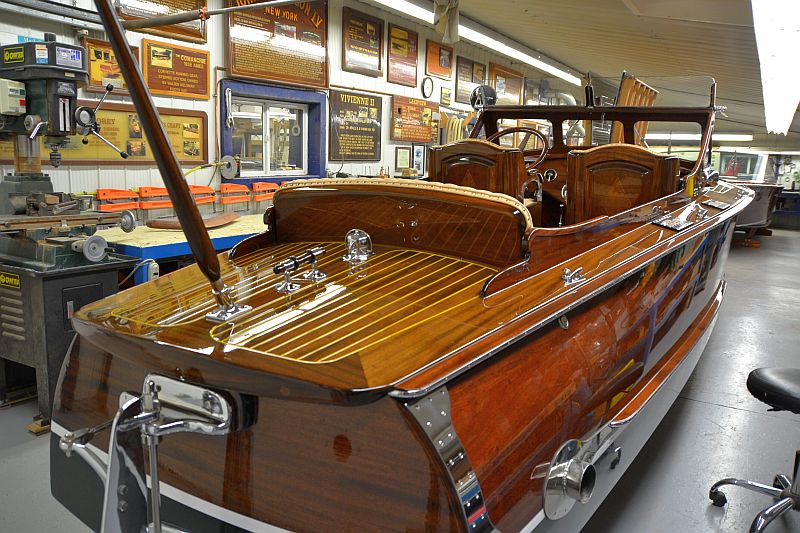 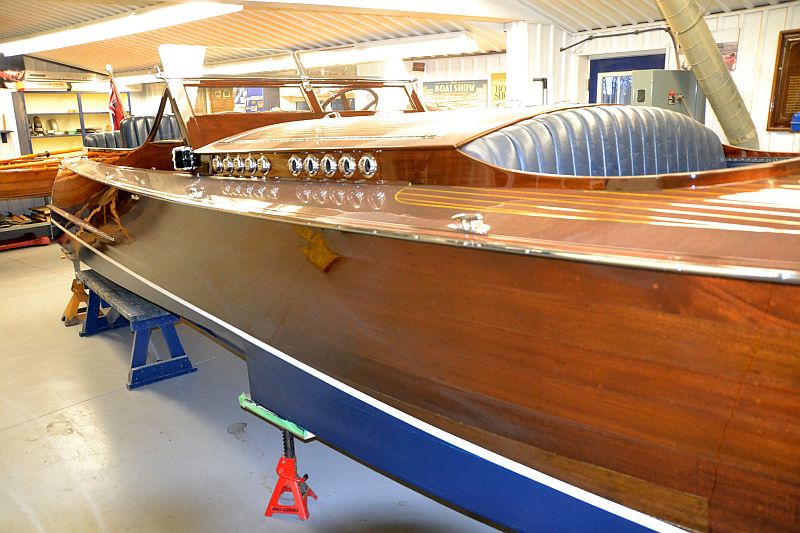 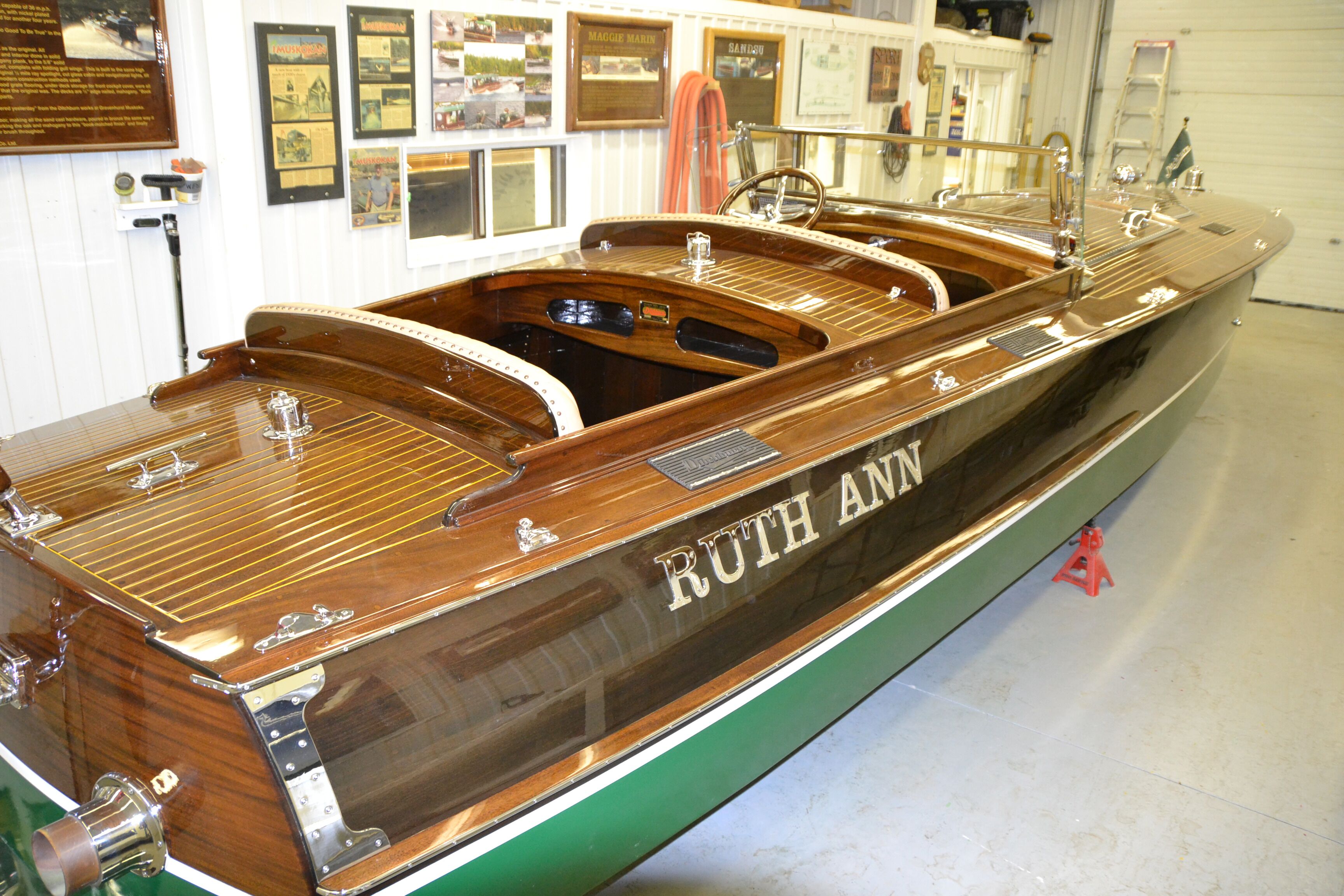 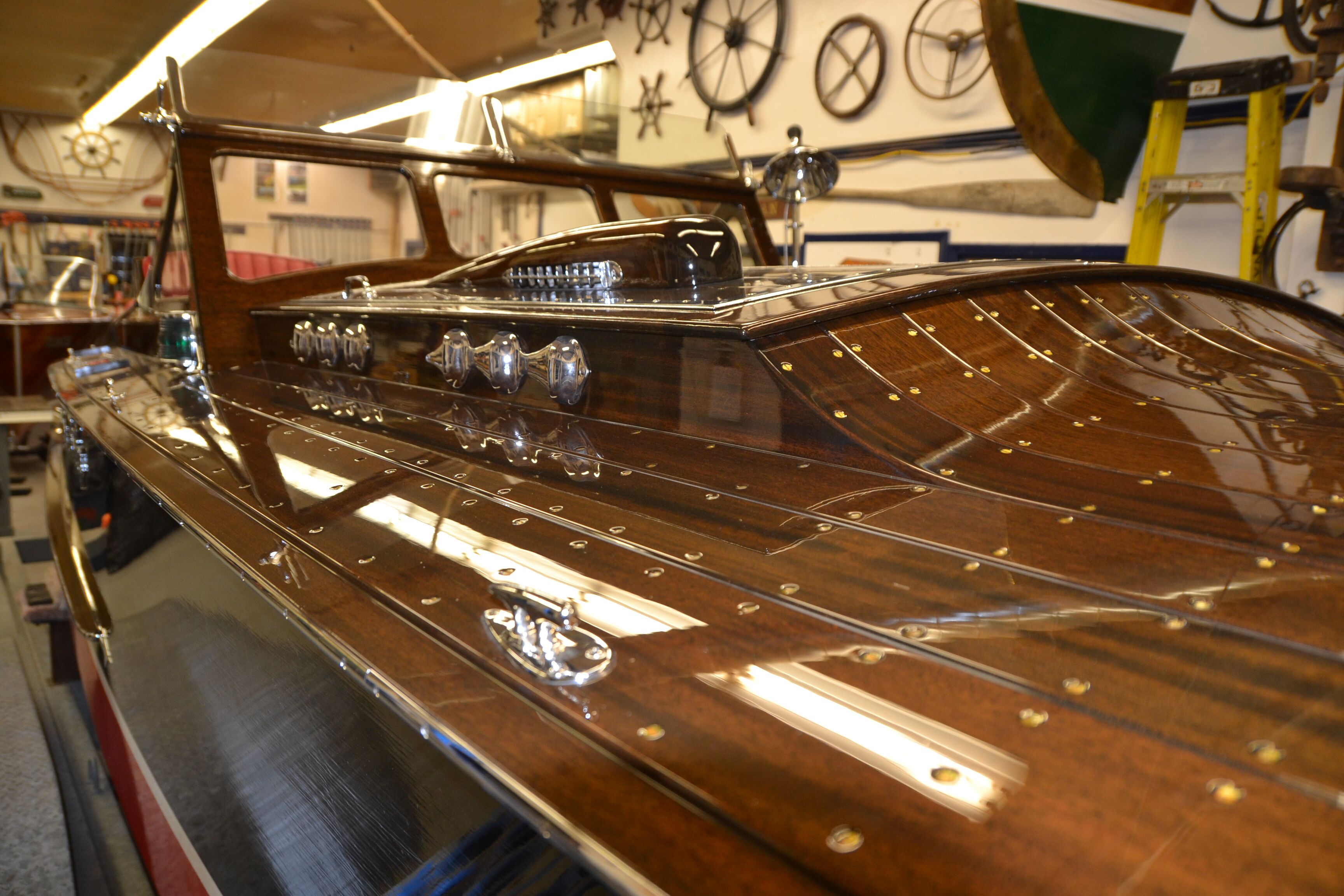 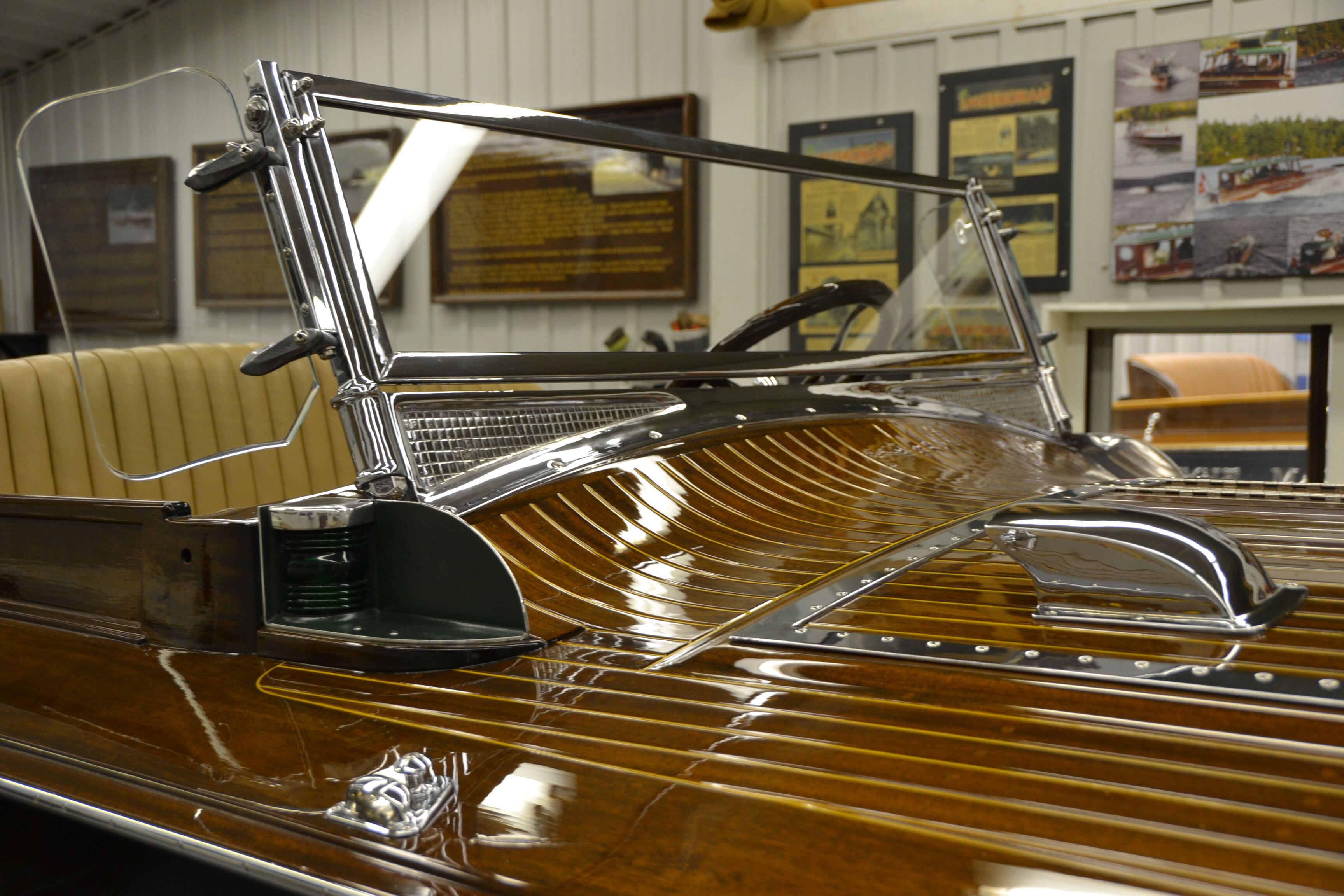