A visit to Dispro heaven! 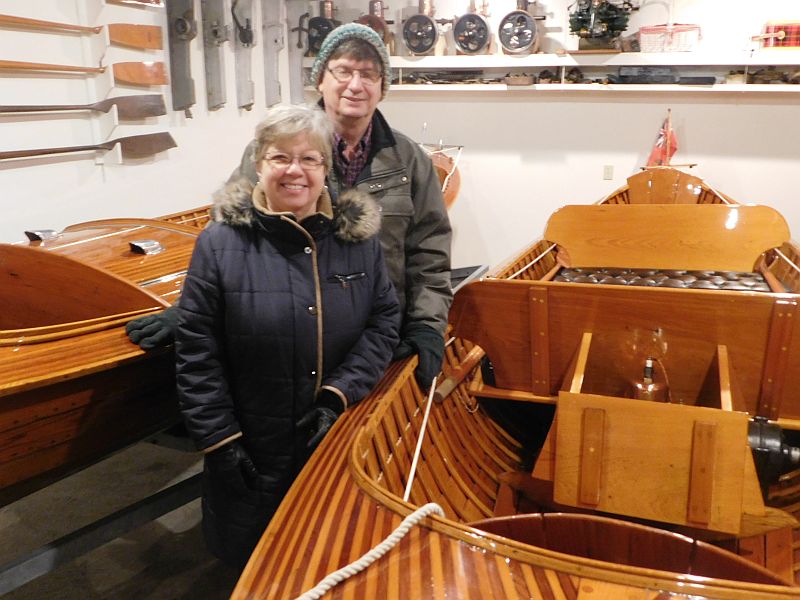 Luckily, both the Dicksons are Dispro enthusiasts!

Imagine owning not one, not two, not three, not four, but FIVE Disappearing Propeller Boats! Welcome to the world of Ian and Barb Dickson, Muskoka cottagers and enthusiasts,  who kindly opened their Muskoka based collection to Port Carling Boats.
The Dicksons have been involved with Dippies for over fifteen years. As you can see from Ian’s meticulous workshop, he really knows what he’s doing with these craft. They are all beautifully preserved. Ian does the engine work himself. Not only that, he is very generous with his time and expertise when consulted by other owners. 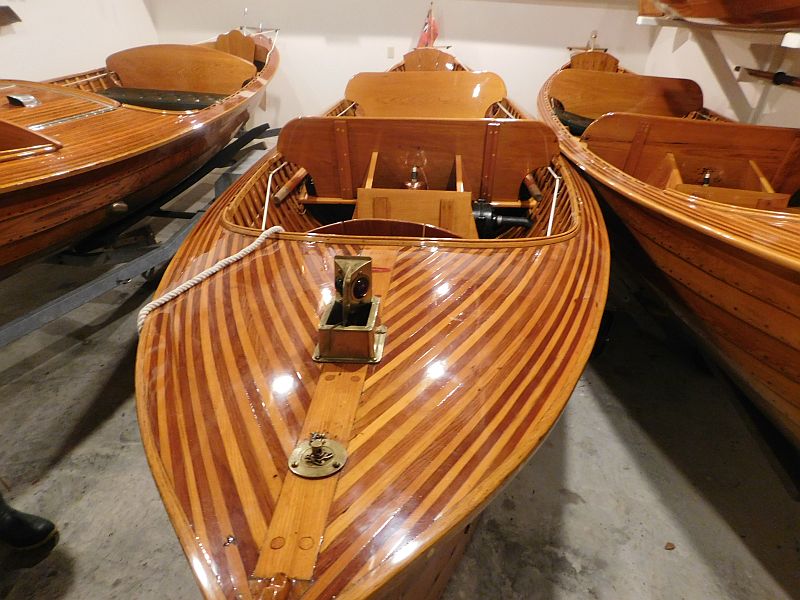 The beautiful deck stripping and collapsible brass bow light are features of many Dispros.. 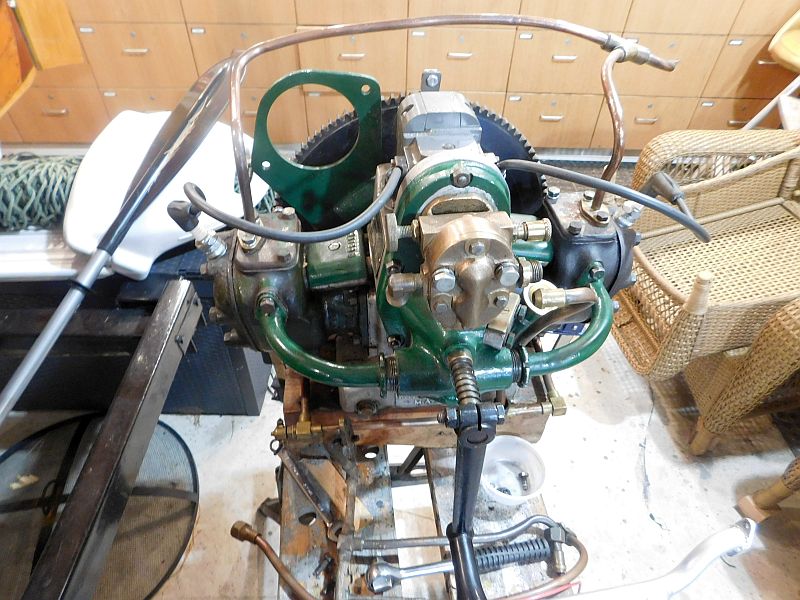 A two cylinder Conventry VIctor engine gets a make-over. 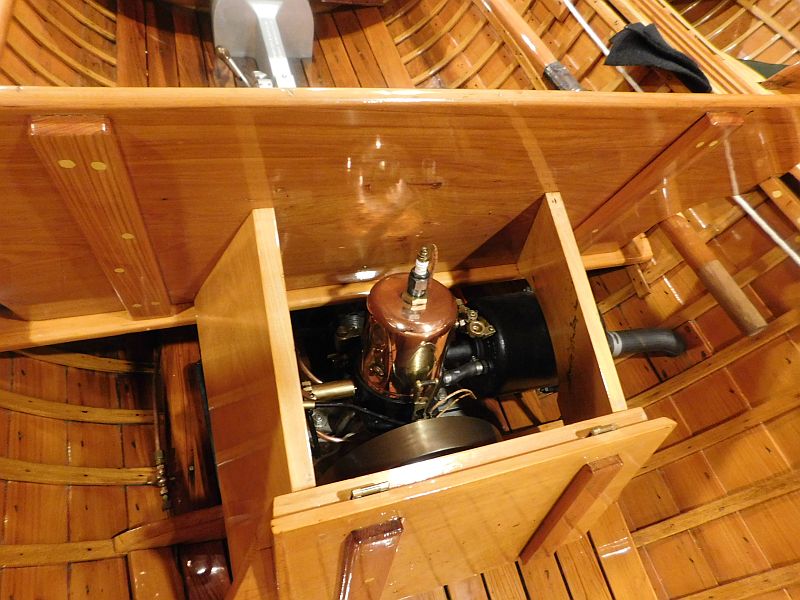 The engine box assembly on this Waterman copper jacket can be removed with one fell swoop!

For the uninitiated, Disappearing Propeller Boats, (aka Dispros or Dippies) surfaced about a century ago,  in Muskoka, Ontario. The beauty of these boats is in their simplicity, light weight and the distinctive disappearing propeller mechanism, which when required, will vanish into the housing just above the hull bottom. Very handy for shoals, weeds and beach landings. 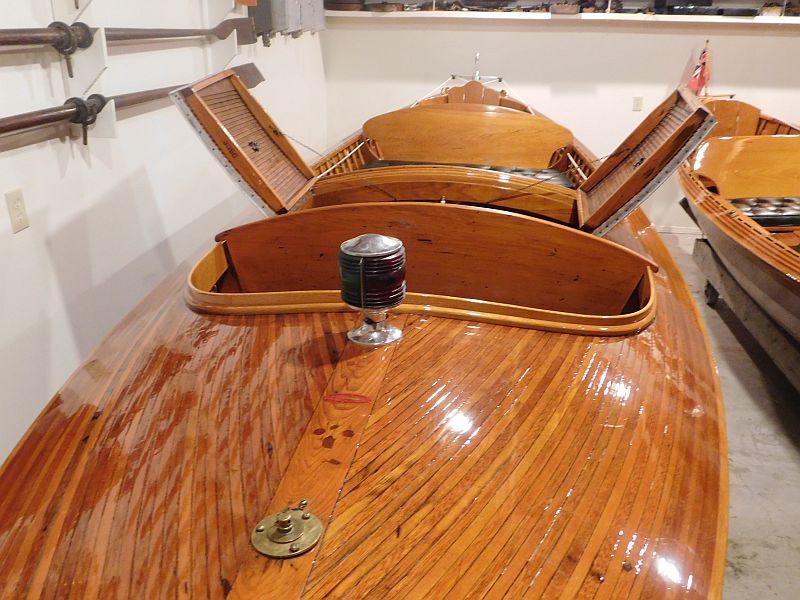 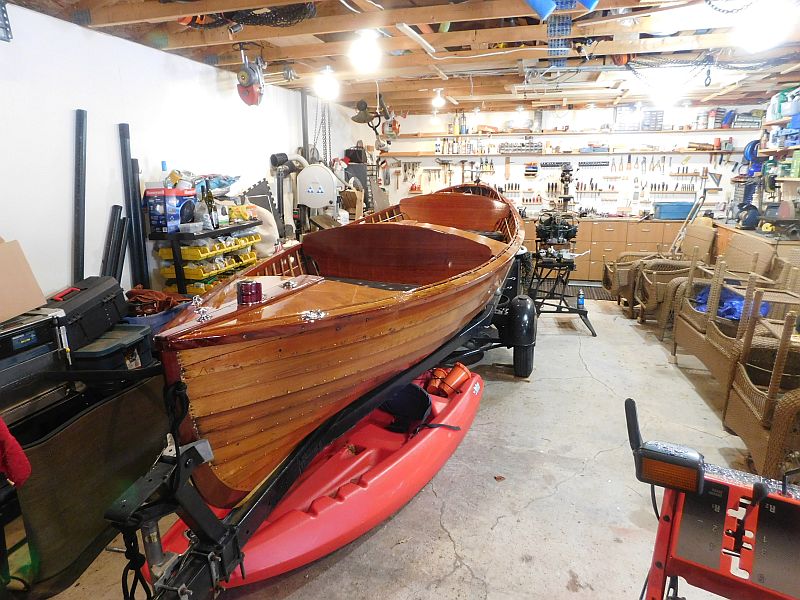 Note Ian’s beautifully organized shop, not to mention the charming Dippy in the foreground.

When asked about his engine preference, I was expecting Ian to nod in the direction of the “newer”, two cylinder Coventry Victor engines, featuring greater thrust with a more modern design.  Surprisingly, Ian expressed a preference for the earlier single cylinder models, such as the Waterman copper jacket, or Dispro engine. These simple engines, he noted, can often be repaired on the fly. Having said that, Ian also commented that if the magnetos on the Coventry Victors are in good shape, these engines will usually provide reliable propulsion.
As we have mentioned in previous blogs, Dispro owners, (like blondes?) have more fun. Off they go in convoys to some of the most unlikely and hair-raising waterways. Luckily, these “pregnant canoes” are seaworthy, and will even handle big swells on Georgian Bay. (Not for the faint hearted, however).
For anyone interested in further information about Disappearing Propeller Boats, The Dispro Owners’ Association is a good place to start. The Association produces a quarterly newsletter, and provides companionship and knowledge for  new-comers. The group can be reached at disproboats.ca
(Stay tuned for the video.)