There used to be an International Boat Show in Toronto somewhere around the CNE, but with local shows cancelled for the second time, the cruise concept has been a popular replacement.

“Taking up the challenge” says ACBS Toronto, is their response in the form of cruises throughout Ontario and beyond. Saturday, August 21 was the day of the cruise. The lake areas participating in Ontario are Muskoka, Rosseau, Lake of Bays, Gloucester Pool and Pigeon Lake. 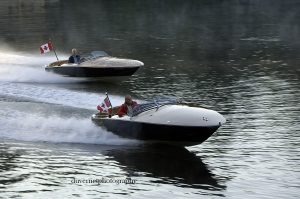 Unfortunately for land viewers on Lakes Rosseau and Muskoka, the boats were off in the distance somewhere since no part of the route comes near enough to a public shore venue to see the boats. Also, all hull designs of boats, whether displacement or planing hull, were touring together. Sometimes it is difficult for the planing hull boats to meet the speed of displacement hull boats without creating huge wakes. Dispros and similar boats, such as vintage outboards, could create their own parade or even a UUMMT, (Unauthorized, Unofficial, Mini, Misery Trip) – tongue in cheek.

In any case, each of our lakes can feature a pretty amazing collection of wooden boats, especially long deck launches from Minett and Ditchburn. Greavette boats went in a more sporting direction with runabouts featuring dramatic tumblehome and rounded covering boards. 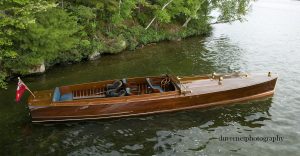 Lake of Bays, Muskoka, held annual boat shows until COVID. The cruise in the east part of Muskoka was organized by Rita Adams. A number of local boats have left the area with family changes, but there was a nice mixture of boats in that cruise for sure.

← Maywood, a New Arrival at Grace and Speed
A Fleet of Dispros on Lake Muskoka →