It felt like a rebirth or a transition from one century to the next. It has been as much as three years since many ACBS members and antique boaters have physically seen each other. But it felt like a lifetime.

The Toronto-Chapter of the ACBS’s annual show in Gravenhurst is by now a well-oiled machine with a manifest that covers nearly every eventuality in detail. The day does take extensive planning and co-ordination between the club, the town and many other partners. It was a seamless affair that was clearly enjoyed by all walks of life and ages. The show was honoured with the presence of local town and provincial representatives in the opening ceremonies. 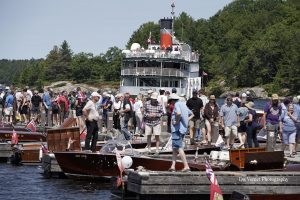 Well over 100 antique and classic and fiberglassic boats lined the docks. The list included many old favourites as well as a few curiosities from near and far. Rainbow IX was the show’s wooden poster boat. Built in 1922 to race at the most challenging levels, she is now enjoyed as a sport runabout in the collection of Murray Walker. 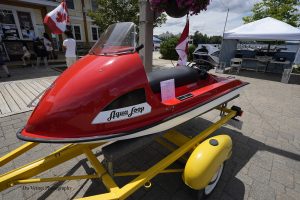 The range in size of the boats this year was remarkable. Launches extending beyond 30’ to tiny outboards from the 1970s and everything in between were on display. The Aqua Loop is a nine-foot-long tiny little outboard, rated to take up to 25HP. The Aqua Loops were built in Quebec between 1972 and 1974. The samples in the show are owned by Wayne and Nicky Robinson of Port Perry. The concept clearly anticipates the concept of the Jet Ski. They were joined by a good sampling of Sea Fleas and boats suitable for small outboards.

At the opposite end of the scale was a Shepherd inboard. While not the longest, it was likely the largest with a great beam, freeboard and roomy seating.