As reported in the previous blog, Altair never suffered from lack of power. The challenge was to control propeller torque, and to balance planing and steering control at speed.

Owner John Peck believed he had figured out what the root cause of Altair’s problem was. In 2004 she suffered damage when falling off a fork lift at Baysville Marina in 2004. She went to Butson Boats to be repaired. 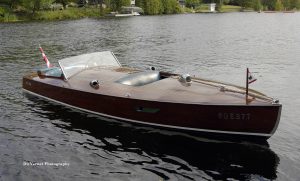 “When she was almost ready, Tim Butson called me and told me he just needed to recreate her rudder. I asked him what rudder he used on his knock-off replicas of Minett-Shields boats like Altair, and he showed me a drawing (it was a deeper rudder). I told him to use one of those on Altair and to put something where the fin used to be, to reintroduce what the fin used to do. So he did. Altair now handles like she was meant to. 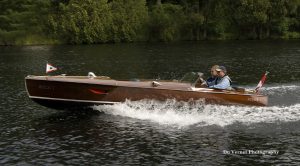 Some aspects of the thrill of her power hadn’t been fully tamed though. “At full throttle she still has a tendency to list a bit from the torque – the result of her narrow stern. I have seen others like her have plates extend from both sides at the stern to increase the effective width of the stern and thereby handle the torque of a bigger engine.” 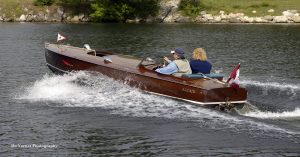 It just took 70 years of use and an unfortunate accident to resolve most of Altair’s handling challenges. Let’s hope that we will get to see her at a Baysville Boat Show again soon.