Canoeing is More than Paddling

On a recent tour of the Muskoka Discovery Centre and the Muskoka Lakes Museum, I learned about some interesting canoes in the collection of these two facilities.

The MSDC has a nice variety of canoes, including a most interesting sailing canoe. This little Peterborough built boat has very swift looking lines. It looks as though it would almost plane with enough speed. It also looks very tippy and challenging to control in more than a gentle breeze. 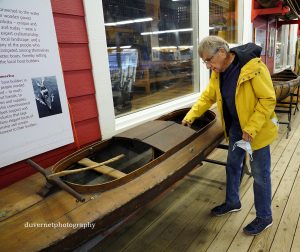 The hull of the little boat looked to be about 15 feet long. It has a gentle rise to the boat and the bow profile is gently curved as well, giving it a look of speed and willingness to rise over the waves. It is most likely sailed just by one person. Ron Riddell, canoe expert at the MSDC explained that the boat can be decked over in sections, leaving minimal exposure to the water. Its bow deck is a trimmed deck in a V that would deflect waves. 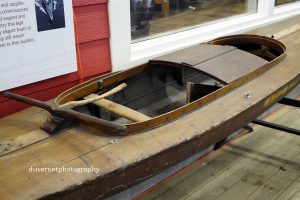 Ron brought out the two masts and showed me how they fitted in. It likely used two small sails. Curiously there were no lee boards or even a dagger board. The rudder is turned from a tiller that could be foot operated through pedals set up just under the bow deck. The tiller is positioned just behind the sailor’s seat as well. 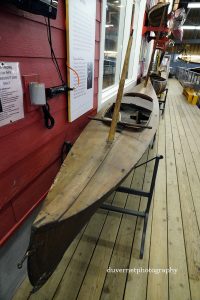 Unlike most boats that are built with longitudinal planking, running from bow to stern, this smooth skin boat was built with its planks running vertically from gunwale to keel. I suppose this might be more rigid, but it would also be more time consuming and involved to build. Imagine each plank needing to be warped to match the next and yet carry the overall curve of the hull. It would be great fun to see it in action.

← Boat Shows in a Virtual World
Maywood, a New Arrival at Grace and Speed →