The Muskoka Discovery Centre in Gravenhurst has confirmed three of the boats that will be on temporary display through the summer. They are all connected with Minett. Chimo is the long deck launch. She was built in 1929 by Minett-Shields. At nearly 36’ long, she is the epitome of the elegance of Minett-Shields. With the key-hole shaped front cockpit and multi-articulating windscreen, she has all the features of a distinctive Muskoka built launch. 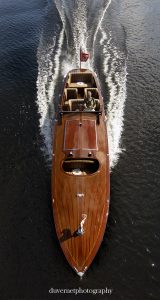 “Built for those who are not satisfied with ordinary standards,” Minett boats are considered by wooden boat enthusiasts to have set the bar higher than any other.  Rare in number, unique in design and custom built, there is no equal at any show. We are fortunate that there are wooden boating enthusiasts who recognize the significance of Minetts and other builders and continue to preserve them for future generations. 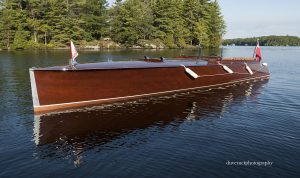 Chimo is owned by Alan Cranfield, who summers in Muskoka near Gravenhurst. It was originally built as an executive launch for Temangami Mining for use on Lake Temangami. Later in life, she was used as a workboat for a fishing camp named Chimo Lodge. She was extensively restored back to original elegance in 1977 and then returned to Muskoka in the late 1990s. She has been a regular feature of boat shows ever since, and has been generously shared with the public. While these boats live pampered lives today, many were put into fairly demanding service when new, as hotel livery boats, island commuters and police boats.

← Discovering So Much About Muskoka
There is Always a Story →