There is a long history of the race winning speed on the water in Muskoka. The sport boats and all-out race boats are among the most exciting vintage craft ever created in Muskoka. From ultra light canoes to hydroplanes featuring aircraft engines with more than 2000 hp, Muskoka boat builders have built them all. Greavette and Ditchburn played the most prominent role, while Minett-Shields built stepped hull challengers that went all the way to Europe. 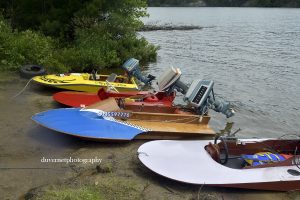 Murray Walker is a key driving force behind the objective of creating a museum to celebrate this history. He purchased eight acres of land a few kilometers west of Bracebridge with the intent of creating a museum dedicated to the boat racing heritage of Muskoka. Muskoka experienced the Rainbow series in the 20’s, the Miss Canada Series a generation later and the Miss Supertest boats after that.  The world of Sea Flea excitement is a smaller scale version of speed thrills that makes  “race” boating accessible to just about any age or pocketbook. All it takes is a sheet of plywood and a few horsepower to go skimming across that water at breakneck speed. 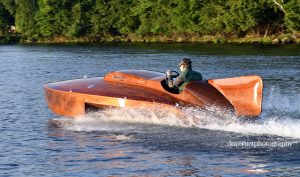 The big names like Harry Greening, Harold Wilson and Jim Thompson carried the headlines, but there was fun behind the wheel every summer for annual wooden launch races in a more home-grown form through the Muskoka Lakes Association and other clubs. Imagine all the possibilities such a centre could offer from STEM educational experiences for youth to a fully fleshed out museum. It might take a few years before the doors open for such an expansive concept, but it all begins with the turn of a key.

← Memories of Skilled and Creative Men
Discovering So Much About Muskoka →