Congratulations to Kent Smith of Lake George area, New York who, after several years with Hacker-Craft Boats, has re-established Cutwater Boatworks, closer to home: Kent’s story and photo are below. (The Hacker in the first photo dates from 1926.  It came in for a new bottom, sides and a deck refinish.) 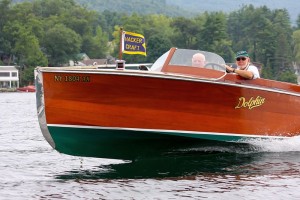 Growing up, my father always had wooden boats, mostly Lymans and Chris Crafts.  On a nice spring Saturday when my friends were out playing ball, I’d be helping my Dad sand, paint and touch up the old boats.

My father passed away unexpectedly when I was thirty-one.  I had spent my adult years working long hours in sales and business management, only making it to the occasional boat show, and decided it was time to follow my real passion, antique boats, which would always be a connection to my father.

I relocated to upstate New York, close to Lake George where I had spent many summers boating with my family, and became very involved with the local ACBS chapter, serving in almost every position including President.  Needing to improve my wooden boat restoration skills, I worked part time on weekends at Cherry Hill Boatworks under Roger Johnson while running a daily computer and network service business.
Any free time was spent watching Pete Fish of Fish Brothers and Tom Hilliker of Vintage Marine, asking hundreds of questions or studying old Classic Boating and Rudder magazines for hands on stories.  I had a 1951 Chris Craft Riviera that needed a bottom and refinish, so all three mentors coached me through the process.  Since then, I worked on dozens of boats with Roger over the years and in 2006, I opened Cutwater Boatworks. 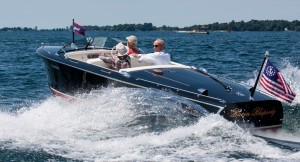 (The Gar Wood in the photo above was displayed at the 1947 New York Boat Show. It featured factory painted black sides and decks, with white interior.  Kent and team installed a new bottom, sides, decks, along with a complete re-wiring and rerigging. The Gar won Best Restored in Lake Winnipesaukee and Best Gar Wood in Clayton)

Being an ACBS member for over twenty-five years and serving three years on the ACBS International Board, I had many contacts and was able to garner some good restoration projects.  I restored a Chris Craft Racing Runabout for one client who in 2010 purchased the Hacker Boat Company.  In June of that year, he convinced me to manage the restoration business for Hacker, so Cutwater Boatworks went into hibernation.

In late 2010, I took over as Production Manager for the Hacker Boat Company, in addition to overseeing the restoration business.  Over a two year period, I significantly improved build quality, finish work, and rigging procedures, as well as customer service and satisfaction.

Unfortunately, Hacker’s facilities were located too far from my home for a daily commute, necessitating the need for local lodging.  After nearly three years away from home plus missing the hands on work on the boats, I decided to retire from Hacker and reopen Cutwater Boatworks.

(When Kent took over this project, the bottom, sides and decks were completed. Kent then fabricated the interior, did all the finish work, wiring, rigging, installed the Chrysler Royal and finished the restoration.)
Today, Cutwater Boatworks proudly maintains and restores antique and classic mahogany runabouts.  Because there is nothing half so much worth doing as simply messing about with boats.