The Disappearing Propeller Boat is an iconic a craft to Muskoka as are the majestic launches. Those long deck launches are still remembered by a few for their days of service ferrying passengers to and from the grand hotels. Once upon a time, the 36’ Ditchburn and Minett-Shield launches were elegant water buses. Henry Wilson, long time owner of Lady Elgin, took pleasure in taking resort passengers out for rides in the old boat. With her canopy, bus like seating and long deck, she was the epitome of the livery boat.

At the opposite end of the motorized boating scale is the Disappearing Propeller Boat. Diminutive in power and size, the DP putts along with a top speed of 6mph. To the casual observer, all Dispros may look much the same, but their differences become much clearer with a bit of review. 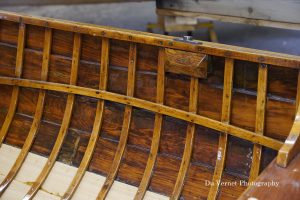 Mike Windsor has made it a specialty to restore these little boats and he had two in process during a recent visit. When in more naked form, one of the unique features of the earlier Dispro that stands out immediately is the wood used in the hull. Early Dispros were made with Cypress. The dramatic grain pattern is particularly striking and it doesn’t take any staining to bring out. While Cypress wood is known for its durability and longevity, especially compared to Cedar, new wood is difficult to find. As a result, the Cypress used in the restoration of wooden boats is now found in swamp beds in the US. It is now generally illegal to cut new Cypress.

← Seaflea Extravaganza
Wide at the Beam →