Edith May Among Others

Another name with much Muskoka history attached to it was Captain Rogers, who first mapped Muskoka’s shores. He operated a steam boat called the “Edith May” and served the Lake Joseph area while Frank Forge served the Windermere area. In 1887, Hanna And Sons rented a steamboat to deliver supplies to the lower Rosseau and Lake Muskoka region and then the upper lakes as well. The boat, “The Lady of the Lake”, was captained by William Kydd and built and operated by A.T. Lowe, who was the engineer. This boat was originally to be a passenger boat, but of small capacity, so goods had to be removed when it was in use for passengers and then replaced when to be delivered. 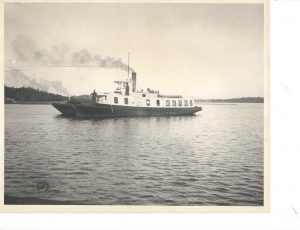 Eventually Hanna bought the “Mink” in 1898, which was also built by Lowe, and used her as a floating store until she burned in 1900. She was rebuilt and then used until 1909 as the Newminko. But she burned in 1915 and was replaced by another steamer keeping the name of Mink. Hanna operated steamboats until 1940. They were captained by William Board, as well as William and James McCulley.

Prior to the fire of 1931, the J. Hanna & Co. store of Port Carling was located as a separate location in Port Carling. The new store of 1932 occupied the prominent location of 98 Joseph Street, now the location of the Muskoka Emporium. The “Wall Looking Back” covers the southeast side of the building. It is a clever mosaic that looks like a profile view of a steamship from a distance, but is made up of photos showing the history of the village.