Who are those people anyway? I recently had some old, old family movies converted to digital. They showed my grandparents at their cottage in 1943. Hard to believe that is nearly 80 years ago. It’s kind of wild seeing your parents before they were married and the silliness that went on. But what makes the movies relevant to this column is how my ancestors spent their summers and of course the latest styles in wooden boats. 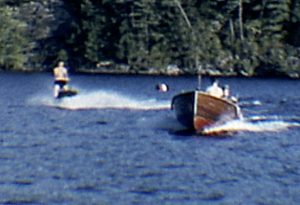 Remember days before the jet ski and other powered toys? There was sailing, rowing, canoeing and yes, water skiing of a sort. You can’t be too carried away being towed behind a 1930s SeaBird or Matheson. It was the centre drive style, with the large open bow cockpit. It might have produced 80hp in a 4 cylinder Buchannan. It tried to make the most of it. Various family members were dragged behind it while standing on a large board with a rope attached to it. The boat could probably muster around 20 mph. The old launch was a multi-purpose craft: water skiing by day, and sunset cruises in the evening. Neighbours in the bay had a much more powerful boat that could pull a person on skis. The old cottage, which stands pretty much intact, has a view of Maple Leaf Bay and Lake Rosseau. The Segwuin would pass the point as it headed into Windermere carrying mail.

There was a time in Muskoka when you could walk over to the nearby vacant point for an evening campfire. Neighbouring friends might join in. Now, from Windermere to Rosseau, every point has been obliterated with a summer palace. I don’t think the old cottage even had a phone. Who would need it? Windermere House was near by, besides it was summer and it was time to reconnect with nature. It is a rare location in Muskoka where the families on either side haven’t changed either, each generation taking over from the previous, for over a century now.