How do you turn a 37’ boat upside down in a boat shop? Of course very carefully.  I witnessed this amazing demonstration of co-ordinated team work and understanding of mechanics at the Boat Builder’s shop in Port Carling. For Rob Gerigs and his team, it took almost two hours from start to finish, but in hindsight, it felt like a blink. In addition, there would have been a lot of preparation for the task well before I arrived. The gantries and supporting stages for when the boat is resting upside down, would have to be built. Assorted belts and block and tackles were checked for appropriate strength and length. As with any workshop, floor space is prime real estate. Benches, ladders and other obstacles were cleared out of the way.  Three gantries were set up for the task. Rob explained that such a long boat required three so that the middle gantry can support the boat while one or more of the belts is re-positioned in the process. 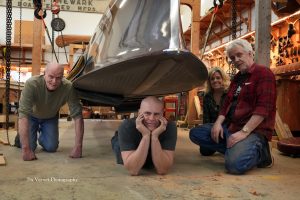 Anyone who has flipped a canoe or rowboat on ropes in their boathouse will understand the process, since it is essentially the same, except with a massive Minet Launch. Rob explained that the team would begin with the belts shifted higher on one side, but with the boat level. The boat will be to rotate as the belts are lowered on the high side and raised on the lower side. Along the way, the belts have to be repositioned to align with the gunwales. The flippling of Nika, the 37’ Minett, went pretty much as planned, with only minor adjustments in the process.

← Wide at the Beam
Calendar is Filling Up →