ACBS Race boat weekend is here!    This is it, folks….the weekend of the “biggest race boat show in Canadian history”.  For the uninitiated, the show began last night in Gravenhurst Ontario, and continues throughout the weekend (July 5-7).  Sponsored by the Toronto Chapter of the Antique and Classic Boat Society, this in-water and land based extravaganza will focus on a variety of heritage race boats,  large and small, including the recently restored Miss Canada IV.  (See photo and description below).  Port Carling Boats will be there, with a booth chocked full of delicious wooden boat listings for woody enthusiasts.  Be sure to stop by and say hello.   Most of all, come on up to Gravenhurst and enjoy the show! 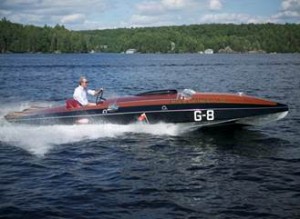 Muskoka, Ontario, June 25, 2013 — The legendary and newly-restored Miss Canada IV will make her second debut at the Antique & Classic Boat Society Toronto on Saturday, July 6, 2013 in Gravenhurst, Ontario. Her first debut was in 1949, 64 years ago.

“Miss Canada IV underwent an extensive 23 month restoration effort, including the installation of a 3000 horsepower Rolls-Royce Griffon engine,” explained Smith. Her next appearance will be at the Rideau Ferry Regatta on August 16-18 2013 and at a variety of local boat shows and community events to be announced.

Genovese will share driving honors with Canadian Boating Federation Hall of Famer Norm Woods. The legendary world racing champion won the World Championship in Can Am flat bottom boats in 1988 and the North American Championship from 1990 to 1993. He won a silver medal in the 1992 world competition at Valleyfield and went on to set a new speed record for the class that year. He competed in the KRR Unlimited Class from 1994 – 1998 and in 2002 was inducted into the Canadian Boating Federation’s Hall of Fame.

Also on hand will be Harry Wilson, the son of Miss Canada IV’s original race team, Harold & Lorna Wilson, and the head researcher and historian during the restoration. “He raced outboards for 25 years, was twice Canadian National and High Point Champion, and has organized races and provided live and television commentary,” said Smith. “As crew chief for this summer’s events, he will be responsible for the BGVRT pits, including boat preparation and launching.”

Genovese is also using the occasion to announce the launch of his BG Vintage Race Boat and Antique Boat Museum expected to be completed next year. In addition to featuring the spectacular Miss Canada IV the museum will include several other iconic boats including Miss Canada III, Rambler, a 70-foot, 1903 Polson Iron Works Yacht, and Pistoff, a 1960 Vic Carpenter Custom Runabout powered by two Chrysler “Hemi”s totaling 970 horsepower.

(Many thanks to Jamie Smith for this information release)