Most of the summer display boats have arrived at the Murray Walker Grace and Speed boat house in the Muskoka Discovery Centre for the summer. As mentioned in an earlier blog, the Rita arrived June 16, having cruised without incident on one of the windiest days of season. At 50 feet long and two open decks with canopies, she would have been a lot of boat to handle in such conditions. 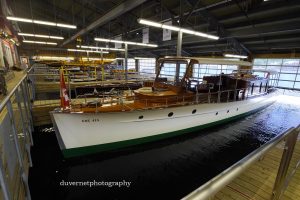 Joining her in the boathouse are Chimo, a long deck Minett-Sheilds, and Crusoe, a Greavette triple cockpit runabout. Both are owned by Alan Cranfield. Crusoe was filled to capacity during the Vintage Boating Day cruise last summer. She made quite a splash. 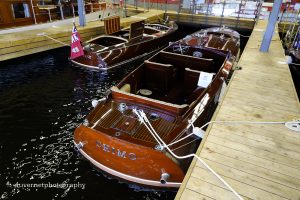 Also in the slips is a Ditchburn called Highlands II. She is a 1927 Ditchburn owned by the Wilson family of Windermere. I remember when she was at Duke Boats for repairs many years ago. Apparently, when she was being pushed out of the second floor space, part of her hull got damaged and the mark has survived. She demonstrates the distinctive features of a Ditchburn with her raised engine hatch and round vents running along the side of the hatch. She is a mid length launch at 27’. She is powered by a 100HP six cylinder Kermath.

Gord Wilson, who passed away several months ago, was a regular participant with his boats at boat shows. Highlands II and BIV were popular attendees.