In any boat shop, you will see a variety of power tools. The planer, the bandsaw and so on, but one of the aspects of building a wooden boat that makes it unique from other wood working trades, is the use of hand tools. 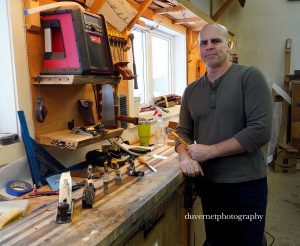 John Lidstone ,who works with Rob Gerigs, “The Boat Builder”, in Port Carling, was chosen specifically because of his ability to use hands tools with skill and passion. I asked Rob and John if they would help me out with a “virtual” visit project. The idea is to capture some video that explains aspects of wood-working and boat building to share with Elementary school students in the form of a virtual visit.  John was just amazing, and I learned so much about boat building. Every aspect requires a careful and measured approach that involves an intense amount of focus. 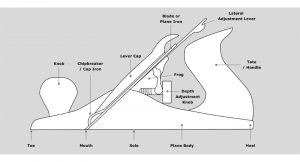 I learned that the humble plane, which is one of the most frequently used tools, comes in many forms and made up of several parts. The boat builder has to set up the planer specifically for the task at hand- the depth of the plane or blade, the depth adjustment knob, the frog, the lever cap and chip breaker. John showed me that he starts by planing at an angle so the blade rips a strip that is just thick enough to do the job, such as smoothing a cut after a cutting a piece of wood fresh from the band saw.  For comparison and explanation, John pulled out about seven different tools designed for planing and scraping. He explained what tasks they are used for and how they are held and adjusted.

← The Band Saw
Summer Begins in the Sun →