Murray Walker, owner of Rainbow IX, was in quarantine having been unfortunately afflicted with COVID just prior to the show ACBS-Toronto annual summer boat show in Gravenhurst on Saturday July 9th. So the boat was safely piloted to the show by Chris Bullen. It would be both an honour and take considerable courage to agree to the task. Fortunately, there were many helping hands to catch her if needed. After determining which slip she was to rest in, all went well in the process of backing her in the slot. Murray’s daughter, Meghan Walker had once told me that Rainbow IX, despite her power and imposing character, is an easy craft to handle. Tell that to a stranger given the responsibility of driving her! 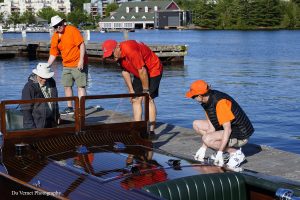 The morning dock greeters have the challenge of assisting boaters with their landings as well as directing boats to the correct slips. It means having all their signals aligned between hand signals and the walkie talkie. If there is any wind, their gloved hands can be life saving for a boat’s finish. 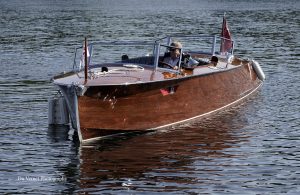 Rick Terry, driving his 32’ Ditchburn, Wiggy III, was one of the early boats to arrive. He has driven the boat since being a teenager, so it was more of a demonstration in how to land a launch. Nevertheless, three pairs of helping hands protected the finish. Some boats can be tricky to land, especially if there is any wind. Gord Baker in a Glenavey II, a Minett-Shields, was also relieved to have the helping hands.