Heritage Events of the Past

We all hope a return to some kind of normalcy this summer, but the likelihood still remains unclear. In any event, so to speak, winter is a good time to reflect of interesting heritage events of the past, especially as the snow falls and the temperature hovers around -20.

For my memory, the most remarkable events in the history of Port Carling and area were the unveiling of the Wall Looking Back and the boat, car and air show at the Muskoka Lakes Golf and Country Club. The MCLCC hosted what was undeniably the most spectacular show of its kind, at any time, period. Nothing beats a rocket power-boosted Hercules swooping down, nearly skimming the water and then pointing to the sky, firing its rockets to head into the oblivion. Spectators literally fell into the water with surprise and amazement. 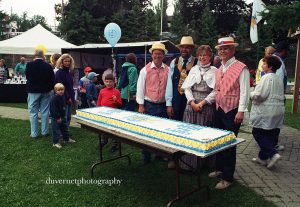 On a more subdued note, the town, which officially incorporated as a village in 1896, held a Hub of the Lakes Heritage Festival in 1993. Boats were, of course, a major feature of the event. Reviewing events like this, seeing the boats nearly 30 years younger, many with different owners, is a reminder that the oldest of boats have spanned generations and will hopefully continue to. 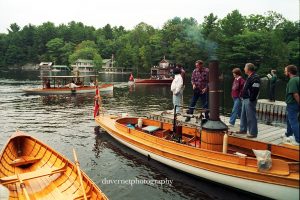 The docks along the island area were filled with Dispros as well as a steamboat called Seraph, owned by Paul Gockel.  Gockel still has the steamboat, which sports an engine that dates to 1880. This little boat had yet to receive her canopy.

The event served to bring more attention to the community in the shoulder season and was held following the peak of summer months.

← Curves in all the Right Places
Boat Shop Art →