The world is going electric, especially when it comes to automobiles and personal transportation. Mandates and policies are already in place and more auto makers are rising to the challenge of creating suitable replacements that are powered by batteries.

In the boating world, this is also happening, but it is more complicated. Where do you “fill up” on the go? While the technology is ideal for slow moving boats, it will likely be a while before that ski boat and other high speed water craft can replace their gasoline power plants with electric power.

The Dispro, on the other hand, is an ideal candidate for a conversion to electricity. Their 18’ hulls were never intended or designed to go much faster than 6 mph. The single or twin cylinder engines develop less than 10HP and the running gear is relatively simple. 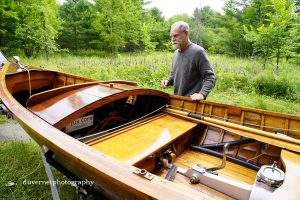 Tom Wood, who has been a Dipsro fan for many years decided to take on the challenge of creating a trailer queen electric Dispro. The experimental specimen came in the form of Gladys, a 1947 Greavette. According to Wood, records show that this was the most productive year Greavette had for building Dispros. 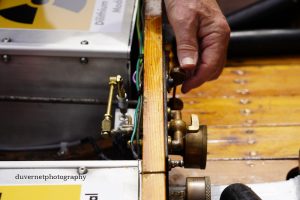 The goal, according to Wood, was to create a conversion that would keep up with other Dispros, run for a day’s worth of cruising and be easy to trailer. There were fewer modifications than you might think, but the end result met all expectations. Wood has logged nearly 40 hours on the electrified Dippy. More on the conversion in the next blog!