Before roads serviced the distant shores of Muskoka, shoreline residents and islanders faced the same challenges with transportation and supplies. The Keewaydin Island and the Seven Sisters Islands of Lake Muskoka were an island community that depended on the steamships.

David Gibson, a summer resident of Keewaydin and then President of the Keewaydin Island association, took the initiative to capture memories of life on the island. In the process of putting the book together he also came across a collection of photographs by Edgar Hugill, who ran a photo studio in Ingersoll, Ontario from 1880 to 1896. He was also postmaster of the Island for 51 continuous years. 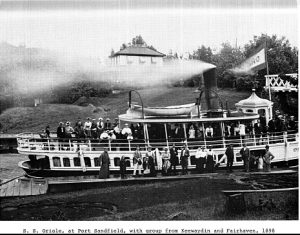 Returning to the focus of the steamships, the earliest landings were in 1890, by the Muskoka and the Oriole. The Medora would land on special occasions and the Kenozha and Nipissing were regular callers. Gibson reports that Hugill had a parrot that had been taught to say, “Here comes the Nip.”

After the Nipissing evolved into the Seqwun in 1925, she would make two stops a day for mail. She stopped at 9:30 am to pick up mail and returned at 5:30 pm to deliver mail. Such were the duties of the Royal Mail Ship.

The Sagamo, on her 100-mile route, would also stop occasionally to pick up passengers for this long excursion. The commercial steamships of the Navigation Company and many other privately run boats were critical sources of summer supplies and transportation. More on that in the next blog!