There is no question that the hey day of boating building in Muskoka was a short span of maybe 20 years from the mid-teens to just after the Great Depression, but many wonderful boats were built in Muskoka and continued to be built here and elsewhere. With our wonderful lakes, our region is naturally going to attract a wide variety of craft, both newer and from that classic period. 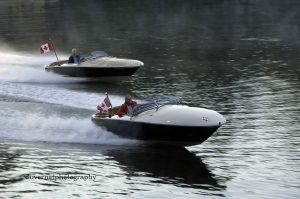 Kavalk boats is one brand that attracted attention in Muskoka. The models I have seen are sleek and sporty boats that perform every bit as well as new fiberglass boats. Their design is a two-tone look with mahogany decks and inlaid bright woods to give contrast. Originating in Croatia seven generations ago, the Kavalk boats in Muskoka have become classics of their own design. In the 1980s, 19’ Mahogany Mistral, with its black hull, was displayed at the Toronto International Boat Show, and became a hit in Muskoka. This photo shows two in the Lake of Bays area. The Kavalk line of boats, which came to Canada in the 1970s, is the ideal combination in the eyes of many happy boaters of wood and technology. There are several Kavalk boats in Muskoka. Black J, once owned by Lt. Gov. John Aird and then by George Whyte, Lake of Bays. She was the poster boat for the Baysville Boat Show on Sunday, August 15. New paints and epoxy materials make it possible to show the beauty of wood and protect it with a durable covering.

I suppose the Kavalk could be considered an exotic line, like the Riva boats from Italy, that have become sought after in Muskoka as well. The more modern look of these boats is definitely in contrast to the long deck launches of Muskoka, but they serve a completely different purpose and appeal to a different taste. In another 40 years, will we be looking at the Kavalk and similar designs, with a nostalgic eye?