While the rest of us in Canada are suffering through extraordinary heat and no boat shows, the LandOLakes Boat show on Gull Lake in Minnesota was full steam ahead. As one of the last hurrahs of summer, there is a special sweetness to the event.

I have been to it a few times and there are some pretty spectacular collections to draw from. Between John Allen and Lee Anderson as well as enthusiasts with rare and historic race boats, the show hits a high mark for entries. 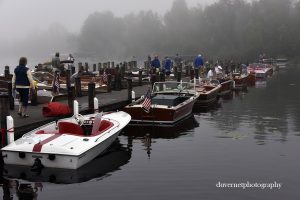 As a Canadian visiting the show, it is also fun to see boats that are seldom seen at shows in Muskoka. There is such a variety and number of Chris Craft, Hacker Craft and GarWoods. Boats with vintage engines like the Liberty, Hall Scott and Hispano Suiza, to name the big three may be fired up at the dock. Apache II, a 1922 HackerCraft, is always a show stopper with her valves popping up and down and the great exhaust stacks sticking up.  Amphicars and similar novelty craft also have strong crowd appeal. Sea Fleas also have a universal draw for the young of all ages. 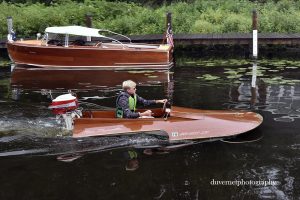 There may be a few Canadian-built boats at the show and they really stand out. Boats like Mineta show off the simple elegance that is so uniquely appealing about the Minett long deck launches from the teens through to the 20s. Utilities by Duke and SeaBird that are more commonplace in Muskoka, appear almost exotic in this foreign context.

Let’s hope that travel restrictions won’t prohibit seeing the show next summer when Canadian boats will be taking centre stage.