Maywood, a New Arrival at Grace and Speed

The slips are full at the Grace and Speed, Murray Walker boat house at the MSDC. The latest arrival is a SeaBird built just after World War 2. The design of SeaBirds shifted from the open cockpit utilities, centre drive to a forward drive, with the engine placed just behind the second seat. 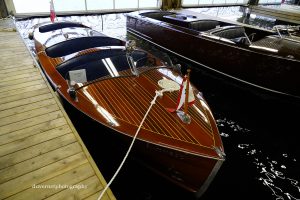 These hulls could plane with enough power, but were generally quite wet at any speed. My family had a 54 Swan model and it was wet standing still. Maywood is a bit different from the standard utility design. She has three separate cockpits and is definitely the more elegant styling.

Maywood, a SeaBird built by Hugh MacLennan Sr., was purchased by Walter Bean in 1947. She was the first to be boat to be built following the Second Great War. She has been an important member of the Patterson-Harrison family since 1958, with the purchase of the cottage “Maywood”. The boat came with the cottage. Susi Patterson, current owner of the boat, explained that the boat was found submerged at the bottom of the lake when they took over the cottage. She was named then named “Betty Pat”. 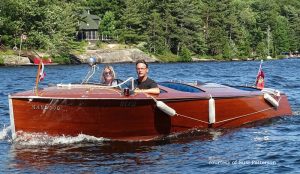 It would be discouraging to say the least, to see a boat at the bottom of the lake, but Susi’s father wasn’t deterred. The professional engineer took it on as a challenge and began the process of her restoration.

Susi explains that her father, a boat lover and talented engineer, hauled it off the bottom and redid the engine, refinished the hull and redid all the chrome. It was his pride and joy.