The dust settling on her sleek frame can’t hide the intentions for which she was originally intended and that was to go fast, faster than any boat had ever gone before. And she did, setting the world record in 1950 at over 200mph. Miss Canada IV is an evolution from Miss Canada III, which featured a double knuckle hull and a similarly sleek shape.

I remember the first trial runs of Miss Canada IV, when the Rolls Royce Griffon was fired up. Tom Adams had finished the restoration of the hull and the true heart of the beast had yet to come to life. Vintage race boats like Miss Canada IV made use of period aircraft engines because they were light and powerful. This version is capable of 3000HP. When in the water, there is no neutral or reverse, just full speed ahead with the prop spinning up to 9000RPM. 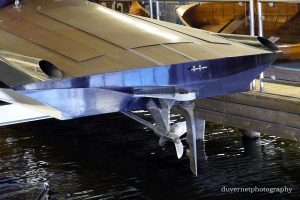 She was designed to essentially fly over the water, touching on a few points and depending on the prop for the forward go.  The first test run was a bit disappointing, given the excitement that led up to that point. There were challenges with water cooling, and that severely limited her performance. Jamie Smith, manager of the team behind her return to speed, expected her to hit well over 100 mph.

A little bit of rust is creeping onto the rudder and prop, but otherwise, she looks like a sleeping beast.