The flashy race boat in the photo below was built in 1937 for G Simmons of the Simmons Mattress Company. It was originally powered by a 16 cylinder Miller engine and named “My Sin”. With that engine, under the ownership of icon music icon Guy Lombardo, (who renamed the boat Tempo VI, the boat won the Gold cup in 1946.  Re-powered in 1948 with a 12 cylinder  1300 hp. Allison aircraft engine, the racer won the one mile sped record, clocking 119.48 m.p.h.  Lombardo retired her from racing in 1953. 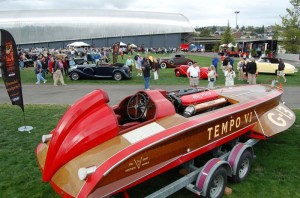