Our congratulations to Simon M. of Oshawa, Ontario. We discovered Simon on the docks in Parry Sound, Georgian Bay, today, tending his resurrected British Channel Pilot Sloop, “Hold Fast”. Originally used to guide large vessels into the port of Bristol, England, Simon discovered the sloop at a yacht club on the Toronto Islands in 2004.  She was a complete basket case, with a tree growing through her hull!.  Mike paid two dollars to buy her, and began a two year process of restoration. Temporarily caulking her seams with silicone so she wouldn’t sink, Simon towed her to Oshawa, Ontario, where work began in earnest. Cotton was re-applied to her hull seams and the vessel was saturated with CPES  penetrating epoxy, then varnished. The teak decks contain so much natural oil that they must be periodically stripped and re-varnished., as the oil leaches up and causes bubbling at the surface. Simon’s efforts have provided him  with a very sea worthy, seven ton vessel, on which he plies the Great Lakes. “Hold Fast has behaved very well, even in 95 kilometre wind, surfing down monstrous rollers.. Thanks to Simon for saving this beautiful 24 foot sloop. 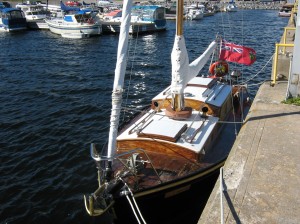 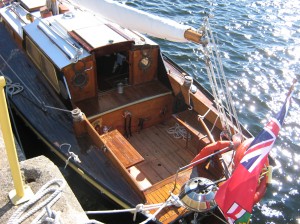 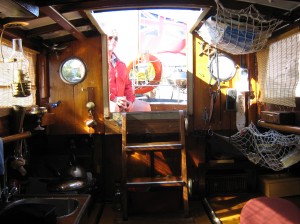 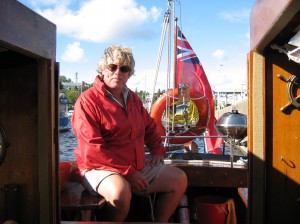