It was just 33 years ago that I first encountered this rare boat, which is now owned by Geoff Browne. She is currently in for restoration at Rob Gerig’s shop in Port Carling, The Boat Builder shop. This rare boat is the Johnston Special, built by Port Carling Boats nearly 100 years ago. 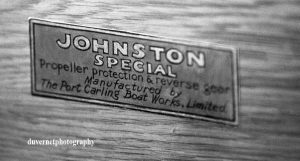 As pointed out in the previous blog, the Johnston Special is often mistaken for a Disappearing Propeller Boat because of its shape and general deck design. The Johnston Special has a solid drive shaft with a skeg to protect the prop. 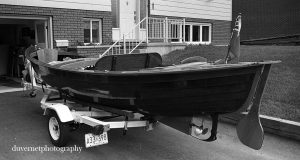 Monte Cristo, when I first met her in 1988, was a restoration project for her owner at the time, Bill Elliott, of Bracebridge. This restoration project had “special” significance for Elliott because he remembered riding in one as a teenager. He spent considerable time and energy researching and preserving as much as he could of the original boat.  His restoration involved replacing the decks and some seating, while most of the hull, apart from the keel and stems, was saved. A new rudder was also needed at the time. The dash control panel had to be replicated. Rob Haggar performed the keel and stem work, while Paul Dodington restored the 4 HP, Buchanan Firefly. 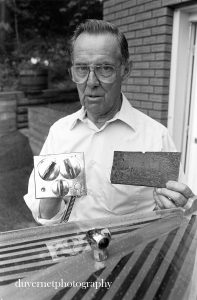 An interesting process involved replicating the existing decals surviving on the deck trim. Alldyn Clark, a well-known Bracebridge based photographer at the time, photographically duplicated the decals. The engine control panel was copied from one used in another boat that was also powered by the Firefly. Rob Haggar happened to come across the sample from a boat discovered at a local boat show.

Is the act of owning and preserving such a boat a “hobby”, a “pastime” or something else? Who knows, but, without such efforts, boats such as Monte Cristo wouldn’t survive. Her story following Bill Elliott’s ownership comes next!