Ron Stevenson is known as Mr. Motor. Anyone who knows him will instantly think of him behind the wheel of something going very fast and something powered by a very special outboard motor.

The outboard motor came in a wide variety of sizes, formats and horsepower. The early versions were feats of mechanical wonder, with features and designs long forgotten and replaced.

Ron’s earliest motor he says is a 1915 rowboat motor. The rowboat motor was made from 1913 until 1925. Did people stop rowing or did they lose interest in the motor? Every CAILLE motor is guaranteed to be easy staring, dependable and durable, says the logo. 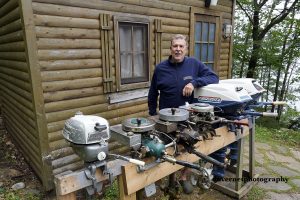 Ron’s model has a cylinder valve to release the compression to make it easier to start. This model is known as a five-speed because the steering and control lever lifts into five different positions: reverse, neutral and three forward positions. Each position corresponds with a specific pitch of the propeller and rotates the prop for the intended purpose. It is very mechanical and I wonder what it is like in operation. 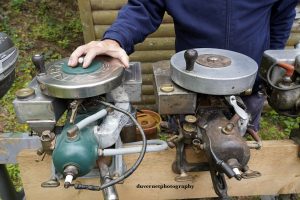 The concept of the rowboat motor was popular at this time and several other companies were making them as well.  With the idea of an outboard motor being as novel as a battery powered outboard today, they were just catching on and the need for outboard power just developing.

A rowboat being a common and highly utilitarian craft, it would easily adapt to such a device. This motor was started using a priming cup, and was hand cranked to start.

To hear and see more about these motors, use this link.