NIKA is one of those Minett 36’ launches that is instantly recognizable at any show or along any dock. With her crystal bow light ornament, she makes the quintessential statement of Muskoka elegance.

As with any of the traditional wooden boats, there comes a time when they need attention in order to preserve the integrity of the hull. Rob Gerigs, aka “The Boatbuilder”, located just west of Port Carling, will be taking on the task of giving her a new bottom. 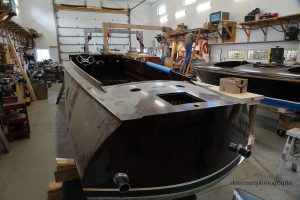 It is a full winter’s job, with new ribs and a complete refinishing as well. The organic nature of wood is such that despite all efforts to protect it from rot, all you can do is to delay nature’s process. 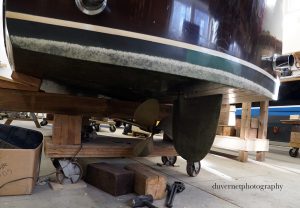 She was in the process of being stripped of hardware and seats when I was at Rob’s shop. Eventually the entire hull will be cleaned out to expose the bottom.  Built in 1924, she is nearly 100 years old and Harry Littler has owned her for many years now. I wonder how many new bottoms she has needed in nearly a Century? While replacing a bottom is straightforward process in concept, I know of at least one situation where the new bottom transformed the ride of the boat quite dramatically.

A similar Minett launch was always known for its huge spray at speed. After the new bottom was fitted, the launch rode with nearly no spray at speed. The explanation was that the hull may have developed a twist that was corrected in the restoration.

← Tide of Development
Emily May →