Every generation or so, many of these boats will come together again in the form of a large collection. One of the earliest collectors of wooden boats was Cameron Peck, from Chicago. He was truly passionate about wooden boats to the point that he had a boat yard on the Lake of Bays.

The Peck cottage and collection of boats has gone and the boats have new owners, but John Peck, Cameron’s grand nephew, has given me some insight into the collection and the passion that once floated on the Lake of Bays. 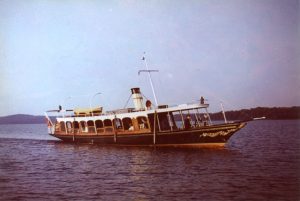 I was in the process of inquiring about the outboard on one of his Cameron Peck’s sea fleas, and John Peck said ‘It looks like an old Evinrude.’

Cameron Peck had a whole stable-full of old outboards. They were kept in the engine shop that became part of Kelmar Marina in Baysville. I worked for a couple of summers at Kelmar Marina as a dock boy and then as a grease monkey and boat gull repairman, and I remember them well. Unfortunately, a fire destroyed that building, and with it all of Cameron Peck’s old outboards. It’s too bad they weren’t moved to a museum before that happened.’

Fortunately some aspect of the history had been captured in photographs, which have been generously shared by the Lake of Bays Heritage Foundation for historic uses.