Altair is the 1933 Minett-Shields sport runabout built for Edson Peck, John Peck’s father when he was 18. She had to travel many twists and turns to finally handle as she was meant to. 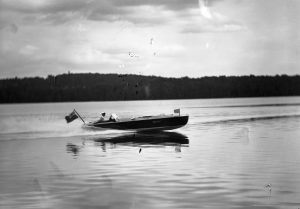 Her engine is a 190 HP Ford Interceptor V-8. John Peck acknowledged that this was more power than she was meant to have and there had been challenges to her handling and adversity to overcome. 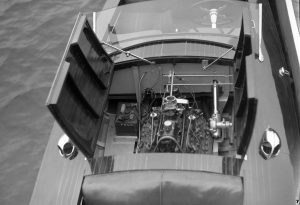 John outlines the challenges and solutions. “The Interceptor was actually more power than Altair was meant to handle. The rudder was long and not very deep, covering only about half of the prop’s slipstream. The result was that the untamed prop stream below the rudder caused Altair to plane a bit sideways with the stern pulling toward starboard. She originally had a fin under the bow seat that helped with stability and turning. 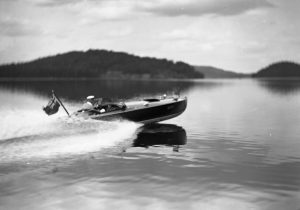 The sideways gait while planing caused her, with the V-8 Interceptor, to buck and twist, threatening to flip over. So the marina got a “brilliant” idea (a bad idea, actually, because they didn’t understand the root of the problem – the shallow rudder) – they cut the fin off. The result was that she still had a sideways gait while planing, and would only answer the helm immediately in one direction – to port. Turning the helm the other way induced a delay, sort of like when the Titanic approached the iceberg with the helm hard over and the wing propellers in hard reverse.” Untamed power isn’t always a good thing!