Queen of the Isles Steam Barge/Tugboat

The profiles of Muskoka’s steamers were a well-recognized sight, but they weren’t the only transportation using steam. Besides the number of smaller private steamers, steam was an ideal power for slow moving barges and tugs.

The Queen of the Isles was one such craft. Reported in the July 19th issue of the Muskoka Sun, were two remembered tugs. Captain Croucher operated the steamer “Niska,” and the “Queen of the Isles,” delivering tan bark to the “old tannery,” was owned by the Beardmore Company, which operated upstream from Williams Memorial Park in Bracebridge. 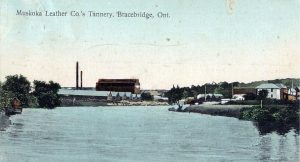 It was part of the summer ritual for staff at the tannery to be given a day off with the company each summer to go blue berry picking. Peter Smith, manager of the company in 1916 arranged this day and for a group photo aboard the Queen of the Isles. Perhaps as many as 100 people crowded onto the scow to recognize the day.

The tannery opened in 1877 as the Beardmore Co. tannery but was sold in 1882 to Muskoka Leather Company. By 1890 it was one of the largest in Canada and was re-acquired by Beardmore. The tannery was expanded in 1913 but with the decline of demand for leather soles, the tannery in Bracebridge was closed in 1922. At the time, the tanning business provided employment for many farmers throughout the District as well. Muskoka is rich in Hemlock forests, and the red hemlock bark was key to tanning.

Annie Williams Memorial Park is now the annual host of many events such as the Muskoka Arts and Crafts annual summer show. The shoreline looks very different today, than it did with the tannery in place.