Riding on Sunshine, in an Electric Duke Playmate

Boat builder Stan Hunter, of Milford Bay, has made it his quest to electrify the Duke Playmate. He has been acquiring hulls for a while and so far has electrified a fleet of nearly 40 boats with a dozen more to create, as need be.  Stan has spent considerable time and effort to determine currently ideal options for cost and performance. 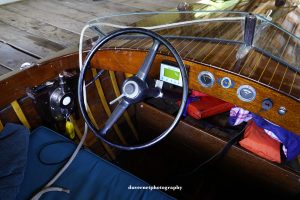 The Duke Playmate is an incredibly simple and yet versatile boat. Little more than a large dory with a squared off stern, they continue to be a cost effective entry into wooden boating. The Disappearing Propeller Boat is a similar craft, but in smaller form and considerably less power. 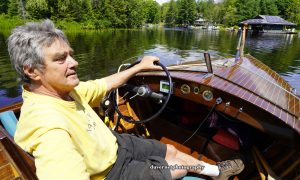 Original power was typically a Buchannan Midget, a robust engine capable of about 25 HP, especially the version with an iron exhaust manifold. Apparently the aluminum versions had a tendency to leak water into the oil. The first Playmates were built in 1933 and were built into the 1950’s. The earlier models were centre drive. In 1939, the steering wheel moved forward and the 19’ hull received greater freeboard. The Playmate would continue to grow with more power and slightly greater size. Its main competitor was the Port Carling SeaBird, which followed  a similar path of development.

These are ideal boats for the conversion. Designed as a displacement hull, they offer far greater practicality than a Dispro, less the magic of the disappearing propeller or “device”.  Instead you do get reverse and a steering wheel.

Hunter imagines the ideal scenario, where you are “riding on sunshine”, with batteries charged by solar power.

Here is a link to the boat in action: https://youtu.be/AgnyZdHyH94