Rowing has always been considered good exercise because it offers great all-round cardio and it is easy on the joints. In the last few blogs I looked at traditional skiffs and mostly those built in Muskoka. There are variations of both the Muskoka skiff and its oars. There are also other designs of rowing craft that are perhaps more performance-oriented. A first step to greater rowing performance can be had with a few tweaks to the oars. 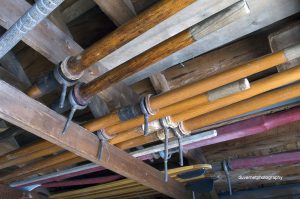 I mentioned Jeremy Masterson a few blogs ago, the boat builder who restored a 1920s Peterborough square stern skiff. He also made a pair of custom “performance” oars for my Muskoka built skiff. They are quite radical as far as traditional oars go. Traditional spoon oars are about 7’ long with a round shaft and gentle spoon to the blade. The blades are typically finished with copper nailed into the end of the spoon to avoid splitting. The oars Jeremy made were made of cedar, which is traditional, but they are about a foot longer, the shaft is elliptical and the spoons are finished with oak inlay. The result is an oar that is lighter, stiffer and gives greater reach and leverage than a traditional oar. 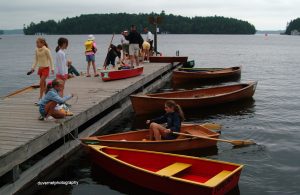 Moving to a craft that can offer a bit more speed, the Whitehall, with a wine glass shaped transom, is a lap strake boat design that can be stable and efficient to row. My Whitehall is a cedar glass design and it has a sliding seat mechanism with outriggers attached. It is the best intermediate step between a rowing skiff and a full-blown racing shell. I have tried a fiberglass recreational shell, but the Whitehall performs better. I use relatively ancient Hudson carbon fibre oars to row the entire shoreline of Lake Rosseau from Windermere, Portage bay, Brackenrig Bay, the mouth of the river into Port Carling and back to Windermere calm mornings through the summer.

← Performance Skiffs
Adventures in a Hudson →