Peter Breen and his staff continue to honour the wooden boat building industry with their restoration of “high end” classic and antique boats.  A trip to the shop yesterday was a feast for any wooden boat lover’s  eyes.  Peter’s attention to historical accuracy and use of “period correct” materials, (such as putty for plank seams), has earned him a glowing reputation in the wooden boating community. Over the next several days, we’ll treat you to some photos of his works-in-progress.
The photos below highlight a century old “Naptha Launch” , originally produced in New York.  Naptha experienced a brief stint as a fuel for boats, as it had a fatal flaw…the tendency to explode!  The boat below was  re-powered with a gasoline engine. Peter’s son has worked on this launch for over a year now, restoring it to “better than new” condition. 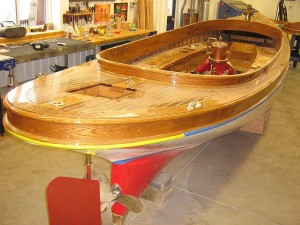 Century old Naptha launch almost fully restored after more than a year in the capable hands of Peter Breen and his staff.

Restoring the “top” of the Naptha launch has been no easy feat.  The complex curves in the design meant that there is not a single straight board in the entire assembly. 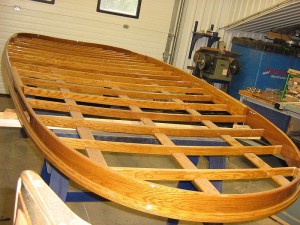