Dual V12 Lamborghini Speedboat Back in the Water 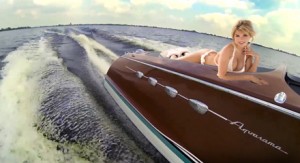 The amazing history and restoration of a one-of-a-kind restoration of a Lamborghini powered Riva is documented by James Tate below. (James is an ace mechanic and industry writer for Car and Driver and other trade publications). Enjoy the story and video below!
Back in 1968, Ferruccio Lamborghini ordered a custom Aquarama model from the legendary racing boat/yacht builder Riva. The era ranging from the mid- to late-1960s and early 1970s saw a revival of passion and excitement in Italian vehicle design, and perhaps no two figures personified this cutting edge intensity than Lamborghini and Carlos Riva, head of the Riva boatyard at the time.

For Ferruccio’s Aquarama, Riva installed a pair of the 4.0-liter V12 engines that at the time were being used in Lamborghini’s first road car, the iconic 350GT. Workers at the Lamborghini factory modified the 350-horsepower V12s for marine use, and when the custom Riva Aquarama was finished, its power and custom open-pipe exhaust made it the most unique Aquarama ever built.

The restoration brought legendary figures together from both Lamborghini and Riva’s past. The Ferruccio Lamborghini Museum in Italy had one of the two original Aquarama Lamborghini engines in its collection, but it took the involvement of Lino Morosini, head of Riva’s engine division in the 1960s, and the late Bob Wallace, Lamborghini test driver and developer, to recreate the modifications performed to the V12 engines for maritime use.

Riva World’s Sandro Zani sourced two 350GT engines (one from the U.S.) while his team rebuilt and restored the Aquarama Lamborghini’s wooden hull from top to bottom, and inside out. The twin-V12s carry the Aquarama Lamborghini to a top speed of 48 knots (as opposed to the 40-knot top speed of the standard V8-equipped Aquarama), with peak torque available from 1500 rpm.