David Gibson’s chronicle of Keewaydin Island and the Seven Sisters also describes the variety of steam boats that docked at the main island to serve nearby summer residents. In a similar vein, the Muskoka Sun’s series on the steamers from 1979 described the different ways shoreline residents might receive their necessities.

It wasn’t so long ago that you would hear a morning buzz of an outboard, usually a smallish Boston Whaler style of boat, that would come zipping by your cottage and the driver or assistant, would hurl a newspaper on to your dock. The Saturday papers must have been a challenge for their size. Each paper was wrapped in a plastic bag readied for the toss. It was a perfect summer job for enterprising teenagers and the routes were passed along through special connections. The Duncan family, which spans several generations, were among those whose multitude of teenagers took on the task. 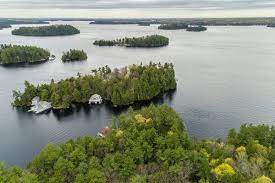 For the summer residents of the Keewaydin steamboat era, boats other than those of the Navigation company that docked were the Lucille, and Iiderim, which were owned by R. H. Verity. David Gibson, in his chronicle, shares how this his mother-in-law, Mrs T.C. Routley, met her mate aboard aboard the Iiderim when she read the palm of Dr. Clarence Routley, while he squeezed her other hand. I wonder what other romantic encounters have taken place about the steamers? The ambience of summer in Muskoka combined with the steam boats must have been an alluring influence.

← Waterborne Services in the 1800s
What a Photograph Will Tell You →