What do you call the rear end of a car? Its transom, stern, trunk? I was looking at photos of Caprice, a one-off 1936 Minett-Shields runabout, when I was reminded of how styling in boats and automobiles were so intertwined. Cars of the 30s featured sloping “sterns” like Caprice. They were also full of curves and sweeping lines. As automobiles became more angular, so did boats, which happened to coincide with the use of fiberglass. 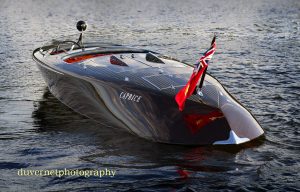 But has this trend or styling relationship separated and been lost all together, especially since wooden boat styling has essentially stopped with the mainstream production of new boats? The Riva fleet has worked on the blend of modern hull designs with that added touch of wooden accents. The sweeping, wrap-around windscreens and sloping transoms are popular with those looking for something more exotic. 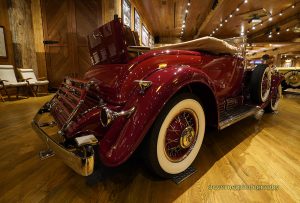 Coming back to automobiles, in reviewing Caprice, it hit me that the cycle of style has been returning to the sloping transom concept, like so many SUVs with their sloping sterns. In a boat, this design may affect the placement of a gas tank or kill the rumble seat, but in an automobile, it seems to me that it creates a huge waste of space for the sake of a design trend.

As for the wrap-around styling, it also seems to be all the rage in automobiles, with the use of LED lights and “bumpers” that serve only for style. What goes around comes around, and the styling connections between automobiles and boats continues.