I have reviewed the history of some of the steam ships operating in Muskoka, but one feature that tends to be more overlooked is the steam power. The steam power for the Segwun was reassembled from the Nipissing. In the rebuilding in the 1920’s, the paddle wheels were removed and twin screw propulsion installed. But what about the power? What is steam like to operate? Who were the builders of these engines and what was behind their designs.

Paul Gockel is a passionate operator of his own steam boat and the history behind the different engines that have powered Muskoka’s steamships. He explained that the Segwun is powered by two engines. One dates to 1907 and the other from 1914. They each use the boiler steam twice. The first cylinder is small and takes high pressure boiler steam at about 160 psi. It drives a piston up and down, which eventually turns the propeller shaft. This first cylinder exhausts its spent steam into the second, much larger cylinder at about 5 psi to use it again. That exhaust steam is sent to a condenser which literally sucks the spent steam from the engine as the condenser carries about 24” of natural vacuum. Eliminating back pressure, this greatly increases the engines’ efficiencies. 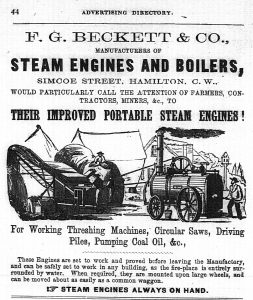 In a Hamilton publication of 1871, F. G. Beckett and Co. advertised steam power for various needs, such as powering saws, farming equipment and mining. No mention of transportation needs of locomotives or shipping. Beckett was located on Simcoe Street in Hamilton. A feature promoted in the ad is a firebox surrounded by water.

← Queen of the Isles Steam Barge/Tugboat
Steamships in the Movies →