Seraph is a privately owned and operated steamboat owned by Paul Gockel. She is one of about six similar boats on the Muskoka lakes that use wood or coal for heat and steam for power. 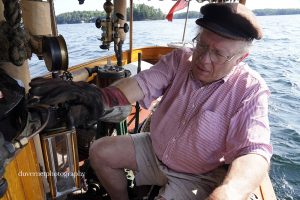 Gockel’s steamboat didn’t start out as a steam boat. Like many very old boats, a hull may see many different engines over its life. Seraph the hull was built in 1906 and originally powered by other means. Gockel believes the engine came from Camp Point, Illinois which is on the Mississippi and dates to around the 1880s.

When you look at a steamboat and see the smoke stack, the firebox and all the moving bits, it is easy to think of them all as the “engine”. In fact, the engine is what converts steam pressure from the boiler to motion to a drive shaft.  The more you learn about a steamboat, the more you learn just how complicated the workings are. 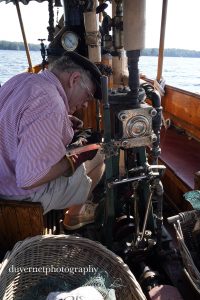 The boiler was built in 1990. Its assembly and design was made possible with the help of Roy Davies, whom many in Muskoka will know as the man behind the restoration of the Segwun’s steam engine and likely the most knowledgeable person in Muskoka about steam engines and machining skills required to remanufacture old parts. Roy passed away a few years ago, but his legacy will last into future generations.

Gockel notes that while the boiler is relatively new, many of the fittings, in what looks like a plumber’s night mare, are historic, especially those that are not under high pressure.

← Putting the Pressure On
The Day Steamboating Began →