Steamships in the Movies

The Segwun, whether directly identified or not, has been a co-star to many a Hollywood movie legend, appearing in a few commercial movies. I’m sure she and other steamships have also appeared in countless family stills and movies over the years. It is always entertaining to see the ships in action when they were in their prime and most needed. Upon reviewing movies taken by my grandfather in the 1940s, the Cherokee was captured leaving the dock at Windermere. She belched a huge plume of smoke as she put on the power heading out into Lake Rosseau. 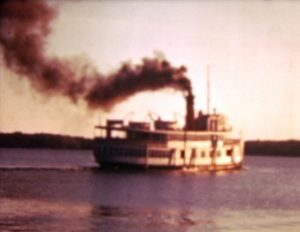 John Miller, President of Muskoka Steamships and Discovery Centre, explained that the Segwun has appeared in at least two movies that he could immediately think of:  The Boy In Blue, starring Nicolas Cage and Sunshine Sketches of a Little Town, by the CBC.  In the Boy in Blue, Nicolas Cage plays Canada’s first World Champion Ned Hanlan, a sculler who took on the world and most often won. The Segwun is seen in the background as a moving vantage point where important spectators and promoters could watch Hanlan race. 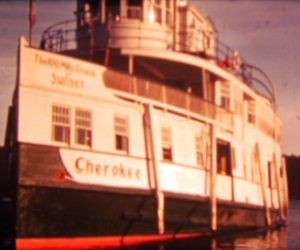 In the CBC’s Sunshine Sketches of a Little Town, which was released February 12,  2012, the movie is a retelling of Orillia author Stephen Leacock’s 1912 humorous literary classic.  The film features an incredible cast of Canadian talent, bolstered by about 60 local extras. The Segwun was disguised to look like the Mariposa Belle. The filming, which took about 5 days, also recognized the centenary of Leacock’s work. Here’s a link to the first look of the movie. https://www.cbc.ca/player/play/2189895620