Stringers for Nika  – Made With Fir

Stringers are long sections of wood. They run nearly the entire length of a wooden boat, so they have to be stable and strong. In some cases there will be laminated sections to reduce the effects of natural twist or bends. For Nika, the stringers are more than 26’ long.

In preparation for installing these long beams of wood, which come from British Columbia, the wood is first let to dry thoroughly. As the moisture leaves the wood, some cracks are expected to appear. Jon Lidstone takes a careful eye over the beam to look and mark the cracks in preparation for filling with epoxy. Another element in the preparation is smoothing the knots with a planer and then filling those with epoxy as well. 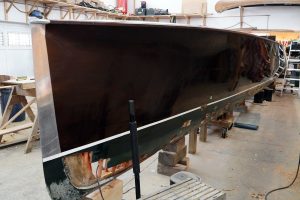 The huge beams also need to be shaped to fit the taper of the hull where they will be installed. With the decks on and the planking still in place, Nika isn’t quite primed to receive her new stringers because there isn’t access to the whole length of the hull yet. 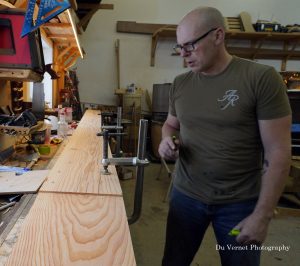 Rob Gerigs explained that Nika, which is currently sitting upright, will be rotated so she will be sitting upside down. The planks below the water line will be replaced now that the new ribs have also been installed. Once access to the inner hull occurs, then the stringers can be nestled into position. Jon noted that turning such a massive boat over is a complicated process and requiring all hands on deck, so to speak!

← Watch for Spring Tours
What’s in a Name →