I recently photographed a very stylish Duke runabout called Vagabond II. At nearly 22′ long and powered by a Grey Marine, of Detroit, Michigan, six-cylinder engine with twin carbs, she is a real statement of Duke power and styling. I’m guessing the engine would put out around 130+HP if it is anything like the Buchanan of the same period, especially with the twin carbs. 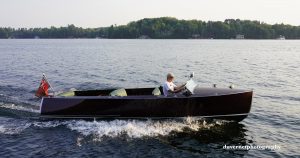 But what makes this boat particularly dramatic are her curves. Sweeping from her bow to a tapering stern deck while the transom flares toward the waterline. If you mention Duke Boats, most of us will immediately think of a Duke Playmate or a similar utility. This forward drive is a utility layout, but with the added drama in her lines. The owner, Peter Stringham, says she is a late 1930s model. From what I have seen, for that time period, she is quite striking for a Duke.  Greavette Boats are also well-known for their curves, especially in the form of a Streamliner; and Vagabond II makes a similar statement, perhaps not as in pronounced a form. 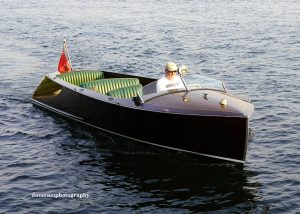 Peter says she was in the Bassett collection at one point and he acquired her through John Blair, of Port Sandfield Marina. She is in very nice shape, having been restored by Ron Butson and then a few minor issues resolved through James Osler. Her engine might need the right touch for a tune-up, but otherwise, she runs well and at a good speed, with all that power. Sadly, Peter has no space for her anymore and is hoping she will find a worthy new home.