You are browsing the archive for Antique and Classic Boat Society | Port Carling Boats - Antique & Classic Wooden Boats for Sale. 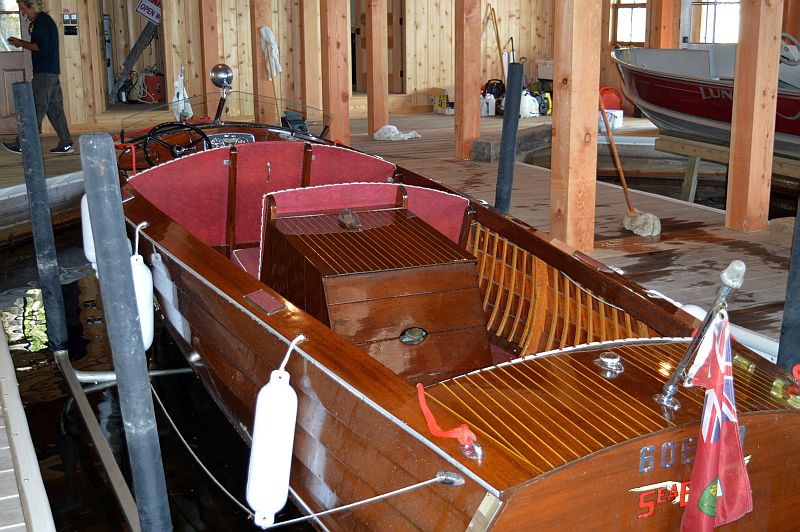 Well maintained antique woody in great working condition. The boat is powered by a  6 cylinder 100 horsepower engine. It has always been stored under cover when not in use. 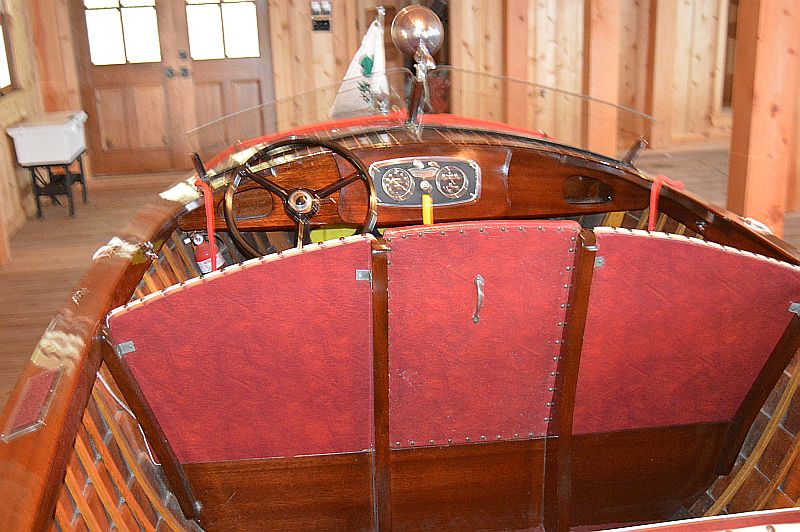 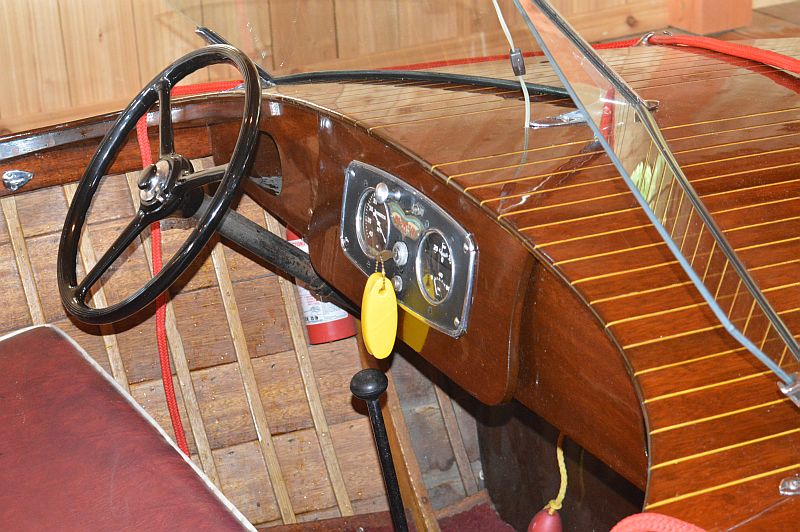 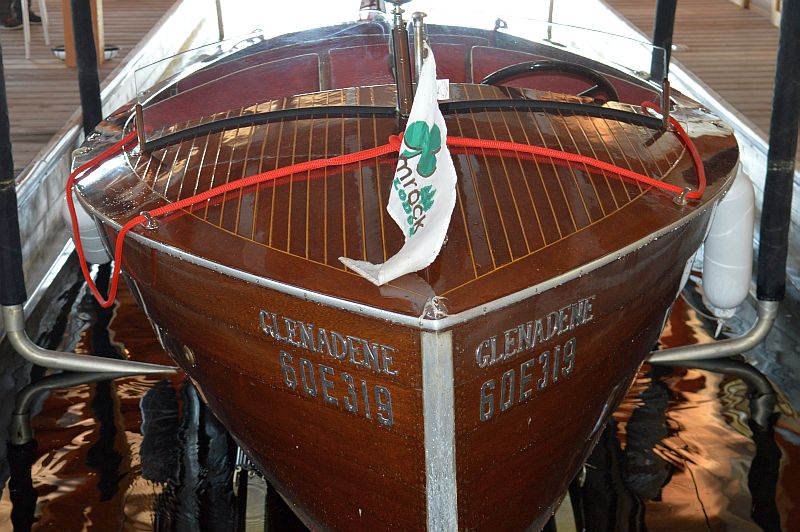 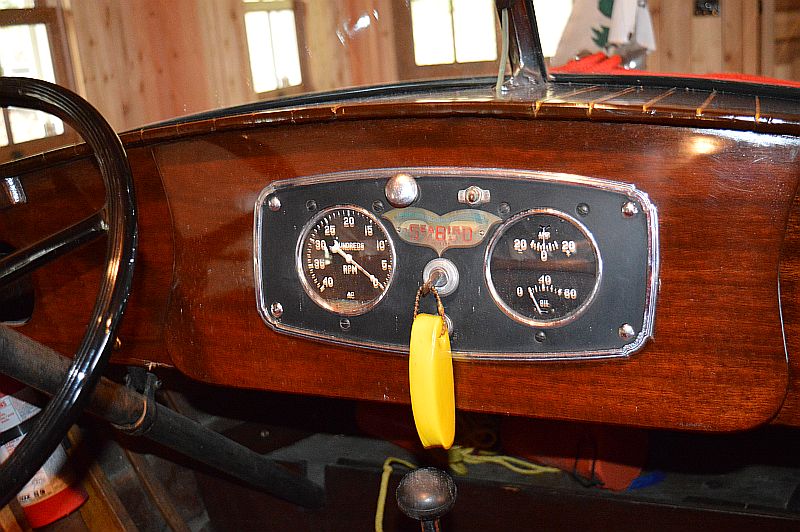 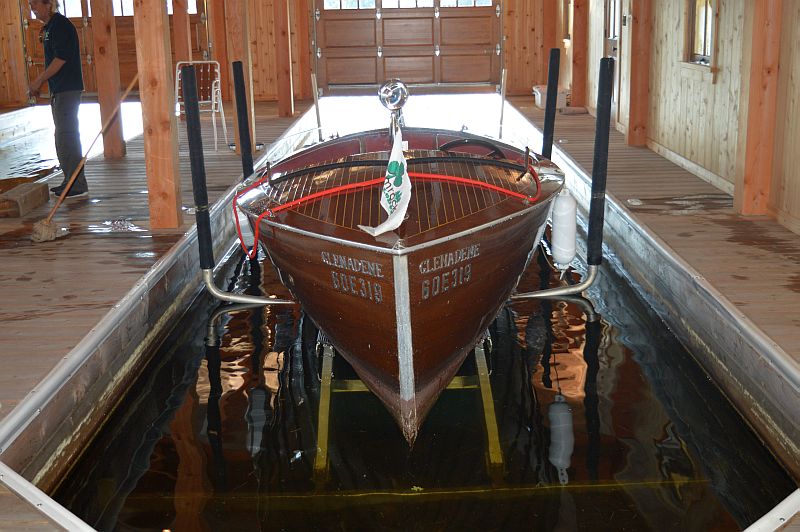 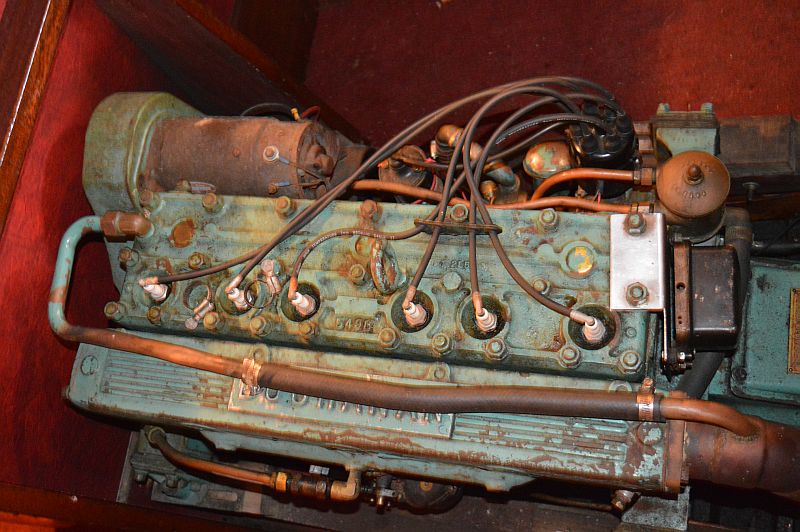 This year’s tour of Muskoka wooden boat restoration/construction shops proved once again that there is a continuing interest and love of “woodies”.  Enjoy the video highlights below.

The Year of the Dippy
If you haven’t already heard, 2015 has been declared “the Year Of The Dippy”. The Toronto Chapter, Antique and Classic Boat Society, is honouring the 100th anniversary of this unique water-craft. Dispros will be the featured boat at the International Gravenhurst, Ontario show this coming July 11th.

In anticipation of the Show, ACBS held a Dippy media event recently at the Muskoka Boat and Heritage Centre in Gravenhurst Ontario. (see photos). Invitees were reminded that the Dippy was created and patented by Billy Johnson and Edwin Rogers in 1915 in Port Sandfield/Port Carling.
The unique feature of the boat, of course, was its skeg protected, fully retracting propeller, which could be recessed manually into the hull of the boat. This was a wonderful feature for Muskoka’s rock laden waterways. The relatively light weight motor (and boat) made the D.P. a kind of sophisticated, spacious, powered canoe.

The Dippy’s simple steering system connects the external rudder by ropes to a small side wheel.

Over the years, in different locales and under different ownership, some 3100 of these iconic boats were built; generally, from 16.5 to 18.5 feet in length. Usually constructed of cypress or BC cedar, the Dispros’ one or two cylinder engines would propel them at a speed of five to seven miles per hour.

Today about 300 Disappearing Propeller Boats survive, much appreciated by their protective owners, who periodically set out with a Dippy armada on “misery tours” throughout Ontario’s numerous lakes.

Some Dispros feature a sturdy “pop up” bow light

More than twenty Dispros are expected at the Gravenhurst show in July. Along with the Dippies, visitors to the show can expect to see a wide variety of other wooden water-craft, a Sea Flea exhibit, a vendor’s row, as well as antique and classic cars from the Cobble Beach Concours D’Elegance.
For wooden boat enthusiasts, the Field Of Dreams will again offer numerous boats and boat parts for sale.

A dippy will carry five or six passengersin relative comfort.

If you needed an excuse to drive to Muskoka for a glorious weekend, the ACBS Boat Show provides the perfect rationale. See you there!

If you love wooden boats and haven’t yet joined a chapter of the Antique and Classic Boat Society, you’re missing out on valuable information, friendships and some excellent connections to the world of wooden boating.
Check out some upcoming activities of the Toronto Chapter, ACBS
EVENT UPDATE: Fall 2014
Please join us for these final events of the 2014 season:
Fall Colour Tour – Haul Out Party/Membership Appreciation Event (October 4, 2014)
Hands-on Fall Workshop – October 25, 2014
Annual General Meeting – December 3, 2014
Fall Colour Tour
Saturday, October 4 – No Charge
Muskoka Wharf, Gravenhurst, Ontario

Join us for a casual gathering of friends and a delicious roast beef buffet dinner at the Muskoka Boat and Heritage Centre. Share stories from this season and start planning for next.

Hands-on Fall Workshop
Saturday, October 25 – $35 per person (includes lunch)
Woodwind Yachts, Nestleton, Ontario
• Ken Lavalette and his team will have a number of stations available.
• John Gullick will discuss how to register a vintage boat.
• Special After-Lunch Feature: Witness a ‘varnish-off’ between two professional varnishers (Ken Lavalette and Murray Parnell) each using his own technique!
• Afternoon Q & A with repeats of morning information as requested
Please click here for further details and to register for this event.

A business meeting will be held prior to our regularly scheduled Board of Directors’ meeting. Details to follow.

We look forward to seeing you at all of these events!

New Generation Learns the Art of Boat Building
Many thanks to the Calgary Herald for permission to use this article.
The Link URL to the Herald is here: http://www.calgaryherald.com/health/generation+learns+boat+building/9348166/story.html 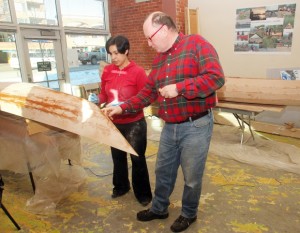 Last winter, Richard Drabble built a wooden canoe in his house. The five-metre project sat in the engineer’s dining room for months.

“We couldn’t have any visitors all winter,” Drabble said. “My wife was very understanding.”

In August, the couple took it on a University of Calgary Outdoor Centre two-week, 250-kilometre canoe expedition down Saskatchewan’s Churchill River.

While paddling down the water in his handmade creation and reminiscing about the boats he had worked on since creating a kayak with his father in England at age 11, Drabble decided he would start a program to teach Calgarians how to build boats.

“It is a bit of a dying art,” he said. “It’s important to teach younger folks how to do it.”

He believed a boat building group could be an opportunity for people, especially a younger generation, to learn a non-digital skill. It would be a chance for participants to create something to help them appreciate Canada’s vast wilderness and rivers.

“This is a generation that sits behind computers and is too sedentary . . . we need to encourage the younger generations to make stuff,” Drabble said.

He pitched the idea to staff at the U of C Outdoor Centre and a temporary boat-building space was soon secured. The Calgary Boat Building Academy was born and, in November, a 12-week Build Your Own Boat course in partnership with the U of C Outdoor Centre began. Four teams, including a family, a father and his 18-year-old daughter, and a young couple signed up. By the spring, four handmade boats will be ready for the water.

The volunteer-run academy has taken over the main floor of a large brick heritage building near river pathways on Memorial Drive and 10th Street. Curious passersby peek in the windows and come inside to ask questions when people work on their boats.

Doug McNeill signed up for the course with his wife and their three daughters, aged 11, 15 and 16.

“We’re trying to make it a family project, just because it’s something that’s so very different,” McNeill said, in between stitching his canoe’s planks together with wire.

The boat-building course has been an opportunity for the family to bond by partaking in a project that’s unfamiliar to both adult and child. Once built, the family will use their creation at their cottage in B.C.

Three times a week, Drabble and four volunteer leaders help participants like McNeill build their boats, which take about 100 man hours to create.

The Calgary Boat Building Academy is in its early stages, but Drabble said interest is growing rapidly. There’s talk of offering a build your own stand-up paddle board course in the future, and courses that teach more advanced methods of boat building. The group is “by community for community” and the only cost for participants is materials. The academy is being incorporated as a not-for-profit and a meeting is scheduled in the current location for Jan. 22 at 6:30 p.m. for any community members interested in the new group.

Material kits for the in-progress boats were ordered from the U.S., but Drabble said he’s keen to design the boats in Calgary and have materials cut by local shops in the future.

The five-metre-long canoes are made by assembling pre-cut planks of plywood around temporary frames and using wire stitches to hold the pieces together. Then the seams are glued, the stitches are removed and the boat is sanded and covered with glass fibre cloth and epoxy resin. Finally, gunwales, seats, thwarts and a yoke are added. The finished product will weigh just 60 pounds and will be self-buoyant and incredibly durable.

Course participant Steven Wapple is looking forward to using the canoe he’s building with his fiancee on the Bow River.

Wapple believes the June flood has scared some Calgarians away from enjoying river activities, but said the disaster has also offered an educational opportunity for citizens to better understand the city’s water and safe water practices.

“(The river) is a great thing we have right in our city. It’s super accessible . . . Lots of things have changed (because of the flood) so it’s like getting to know a whole new river,” said Wapple, who co-ordinates the U of C Outdoor Centre’s rafting and paddling programs.

Wapple guided Drabble on the two-week adventure down the Churchill River this summer and said he admired Drabble’s “beautiful” handmade boat on the trip. He was eager to help make the boat-building course a reality and spend hours creating a boat of his own.

“In today’s world, people get what they want very instantaneously, which isn’t always a bad thing, but it’s just nice to put in the time and the effort,” said the 23-year-old.

Drabble, who still vividly remembers launching the first boat he built into the English sea decades ago, said in Canada, a country with a rich canoeing history, there’s also a heritage aspect to boat building.

Whether boating on rivers, lakes or the ocean, being on water is an enjoyable, and classic, outdoor experience that also serves as an opportunity to appreciate nature and water, Drabble said.

“The experience of being on the water in boats is so much heightened by being in a boat that you built yourself,” he said.