The Sunnyland Chapter of the ACBS brought out the crowds last weekend. Canadian boating enthusiast Murray Walker reported that the docks were well filled with spectators and a number of boaters were taking people for rides as well, despite the very windy day. 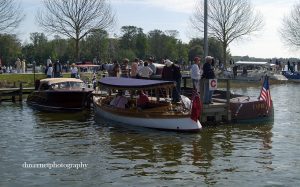 What particularly stood out for Murray was the number of new builds on display. Murray believes that it may be a situation where boaters are looking for something special, but can’t find it. It is simpler to have a custom boat designed and built. In Murray’s opinion, the new builds were stylish and reflected the attractive lines we enjoy in Muskoka.  Murray is hopeful that such a trend may find its way north, as other trends in wooden boating have, to bring new energy to wooden boating. 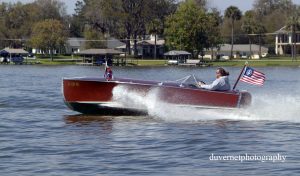 The Lake Dora show is not only the first of the season, but also the first show in more than a year so there was a lot of pent up interest. Also possibly leveraging social media through promotoers helped to get the word out.  The crowd included a good number of younger boaters as a result.

“The best part was getting to see people I had not seen since before the pandemic”, explained boater Les Rue. Les also noted that the show seemed to feature more post war boats, which were not particularly his first area of interest. A number of diehard Canadian boating members came to the show, enjoying the sun and the first taste of wooden and classic boating.