The steamboats of Muskoka have been a mainstay for tourism and transportation for generations. Every event that features one or more of the boats instantly becomes historic. Among the most memorable in recent times was the unveiling of the “Wall Looking Back” in Port Carling that used small images representing the history of the town to create a mosaic depicting a steamboat from a distance.  Another event was the 100-mile cruise from Gravenhurst to Port Cockburn and back with the Segwun and Wenonah II circling Tobin Island on Lake Rosseau. I was able to capture this event from the air and it was spectacular. 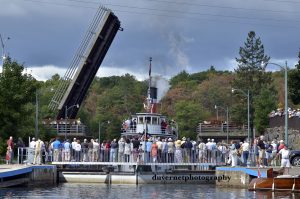 None of this would have become a new chapter in the ongoing history had it not been for the first launch of a steamboat in Muskoka. In June 28, 1978, the Muskoka Sun reported that the day steamboating began in Muskoka was August 8, 1866, when the Wenonah was launched.

On this day, A. P. Cockburn’s Wenonah made her maiden voyage from Gravenhurst to Bracebridge and then on to “Indian Village” as Port Carling was then known. It was a full day trip and Captain McKey was the navigator. “Wenonah” is an Indigenous word meaning “first born.” The legend of “Winona” or “Wenonah” extends all the way to Minnesota, where the First-Born daughter Wenonah threw herself over a cliff rather than accepting a forced marriage to Chief Tamdoka. 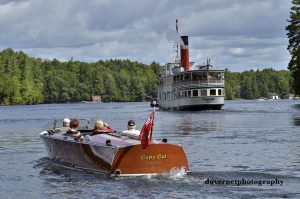 The Wenonah steamship was a sidewheeler and over 80 feet long. She continued in service for 20 years. An interesting note, the Wenonah could not sail into lake Rosseau until 1871, when the locks were built. The story of the steamships of Muskoka is also the story of its earliest major industries and businesses.

← Steaming In Seraph (Part-2)
Treasure On the Bottom of the Lakes: Wenonah P. 2 →