The use and misuse of epoxy in wooden boat building and restoration. 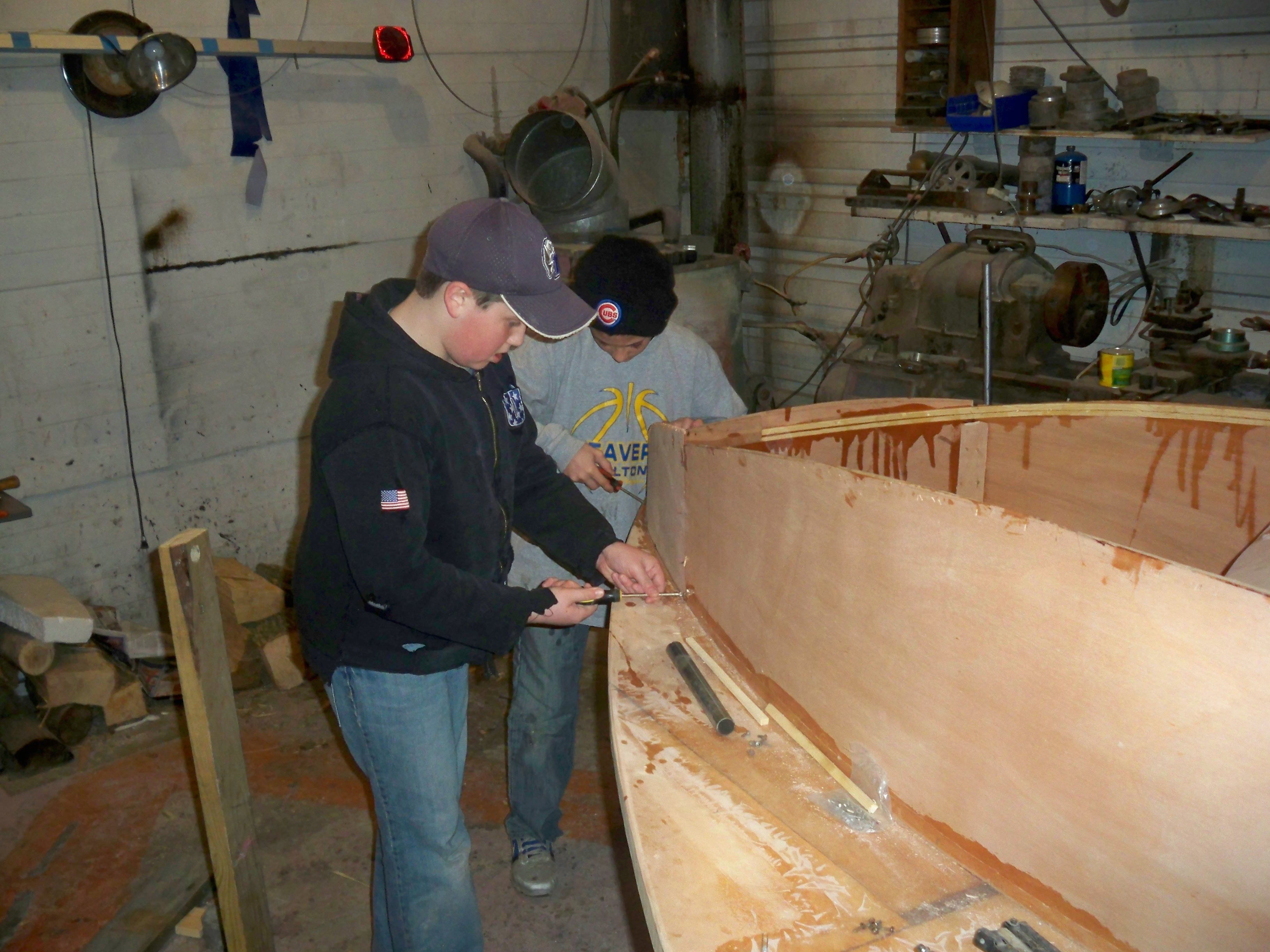 In general, it is less potentially problematic to employ epoxy on a new build than a restoration

“To epoxy or not to epoxy; that is the question.Whether ’tis nobler in the hull to suffer the slings and arrows of outrageous dry rot….or by opposing, end them!”
Shakespeare, Hamlet

All joking aside, there is no shortage of differing views on the pros and cons of applying epoxy or polyester  resin and cloth, to seal the hull of a wooden boat. The perceived advantage of an epoxied hull is the lure of a no soak, leak free bottom that lasts for decades with minimal maintenance. But is epoxy the answer? In conversations with builders and restorers over the years, and in researching this article, I had hoped to find some common ground between traditionalists who prefer other methodologies and those who prefer the use of “modern technology” in their restoration or new build work.

Thoughts from the “Anti Epoxy” School:
The danger with creating an impermeable barrier to the exterior surfaces of wooden planking (or marine plywood), is accidental water penetration. If water becomes trapped inside an epoxy “sandwich”, it will gradually soak into the wood fibres, sponge like, with no sufficient means of evaporating or dripping out. The result creates conditions ideal for dry rot.

Dwight notes as an aside, that for dry rot, a misnomer in itself, to occur, three things must be present. 1 – a food source (the wood),  2 – moisture,  3 – oxygen. If you eliminate any one of these rot can not take place

A significant number of Muskoka area boat builders/restorers, shy away from the use of impermeable membranes for the reasons mentioned above.

Paul Brackley, of Brackley Boats in Gravenhurst, for example, has commented that properly maintained wooden boat hulls will last for decades without the use of so called modern technology. He has had boats of fifty to sixty years of age in his shop, with hulls still intact and functioning well.

High speed, hard chine “woodies” may be particularly susceptible to epoxy issues when pounding in heavy wave action. If enough stress is induced in the hull, hairline cracks may appear between the planking, again allowing water penetration

Tim Butson, of Butson Boats in Bracebridge, Ontario, can share horror stories of owners bringing in boats for routine repairs, only to find major structural damage to encapsulated hulls rife with hidden dry rot.  Attempting to remove epoxy or polyester resin from a damaged hull is akin to scraping concrete from a sidewalk!

What about epoxy applied solely to the exterior of the hull surface, so as not to sandwich the wood?  In theory, that should help to reduce the risk of water entrapment in the planking.  The ability of moisture to dissipate then becomes more dependent on the type of coating applied to the interior hull surface. Alkyd based paints in general are not particularly porous, and water retention issues may remain…

For those determined to use an epoxy/resin coating, in theory at least, the use of a thin, penetrating epoxy sealer such as  “S1 or S2”, for example, before encapsulation, may provide a greater degree of protection from wood rot. (But perhaps not…see Dwight Boyd’s comments on the effect of these thin sealers later in this article)

For double planked hulls, a layer of waterproof flexible “5200” sealer between the wood layers, will provide consistent, waterproof protection for the interior wood layer. The exterior bottom layer can then be treated with a traditional bottom paint.

In general, the “Anti-Epoxy” school would likely support the argument that epoxy-sandwich type applications are best suited to smaller, lighter, water-craft. Kayaks, canoes and smaller sailboats that suffer less high speed pounding and can be more easily inspected for hull damage can make a strong case for the use of hard shell resins.

Notes from the “Pro Epoxy” School: 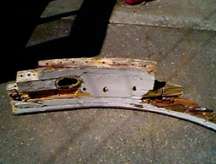 “Before” and ‘after” photos of applied epoxy

A conversation with Dwight Boyd of Clarion Boats in Campbellford, Ontario, provided serious food for thought in terms of the value and use of epoxy. Dwight has been in business for thirty years and uses epoxy for specific applications.

Dwight cautions that epoxy use must be determined by the nature of the boat work being undertaken.  For boats being restored, Dwight only uses epoxy as an adhesive, for example, in scarfing a frame, rib or length of keel. He does not use epoxy as a coating or finish on any pre-built boat.

New construction for Dwight is another matter. The skeleton of a new Clarion boat… frames, battens,  keel, etc. is pre-coated with three layers of West System epoxy before assembly. Over that frame assembly or skeleton, a one quarter inch thick marine grade mahogany plywood skin, also pretreated with epoxy resin, on the inside surface is applied, creating a rigid structure like an aeroplane fuselage; strong, light and stiff. Above the waterline, Dwight applies solid mahogany planking, to the inner skin substrate, laminated on with epoxy. On the bottom, made of the appropriate thickness plywood, a layer of 10 ounce fiberglass cloth set in epoxy is applied, to provide a tough and durable bottom. Dwight does not use epoxy as a surface coat ( as a substitute for varnish).

Dwight does not use penetrating sealers like S1 and S2. Apart from the toxic fumes they produce in application, he argues that the flashing off of the volatile thinners used in these products during the curing process shrinks the sealer, leaving tiny pores where moisture can penetrate, much like a hard sponge toffee. He argues that the use of a penetrating sealer is redundant in a properly epoxied hull.

In terms of resins, Dwight commented that epoxy is far superior to polyester or vinylester resins, neither of which have strong adhesive qualities. Technically, the latter two resins also continue to cure indefinitely and continue to shrink microscopically, which leave tiny pores and hence, gradual moisture penetration.  In Dwight’s words, these resins are “pretty useless for our applications!”  When questioned about the “cons” of epoxy use, Dwight commented that if a resin treated hull suffers an impermeable seal-breaking scrape, prompt action by the owner will prevent  any long term damage.  He stated that in his 25 years of  building “woodies”, customers have not complained about failures in the epoxy system.  “King Of Hearts”, a Gold Cup 25 build by Dwight in 1995 was recently assessed as virtually flawless by an expert at the Antique Boat Museum in Clayton, New York.

Paul Hunter of Blackbird Boat Works in Port Sydney, (now retired) is certainly on the same page as Dwight in terms of  “how to| and “when to” use epoxy.. Paul has been employing epoxy for ten years.  For new builds, Paul uses three Mas (brand name) epoxied layers of ¼ inch marine plywood. A layer of mahogany planking is then epoxied under that substrate. For abrasion resistance, Paul, like Dwight, includes a ten ounce fiberglass mat for additional strength and abrasion resistance. There are no screws left in the hull of a Blackbird boat, once the cold molding process has been completed. Any through hull fittings are again coated with epoxy and Sikaflex. There is virtually no flex in a Blackbird water craft. Blackbird hulls are completely rigid.

Paul comments that older wooden boats are designed differently, and are not suitable for an epoxy encapsulation system.  Having said that, Paul was questioned about the use of epoxy on a beautiful Streamliner in his shop. He replied that when an entire hull has to be replaced (stringers, battens, frames, planking) epoxy becomes a viable alternative.

Like Dwight, Paul reports no epoxy failures with his watercraft. His boats are “bullet proof”, he asserts.

Paul also uses epoxy as a finish coat above the waterline.  Epoxy will accept a water based stain and varnish for UV protection. Rather than varnish, Paul prefers a clear coat urethane. Epoxy will “chalk” over time, if not protected, but will not delaminate.

Ken Lavalette of Woodwind Yachts considers hmself a “traditionalist” and argues that a well built wooden boat will last many decades if cared for properly. Many of the boats in Ken’s shop are there because of poor maintenance, improper storage or other forms of neglect. He generally removes andreplaces bad wood, then reseals, varnishes and paints as appropriate without using epoxy.

Ken is comfortable using epoxy for a plywood bottom becuase plywood is “dimensionally stable”. It won’t expand or contract the way planking will, when exposed to temperature extremes. When epoxying two wooden surfaces together, Ken pre-coats each piece, then adds another layer of epoxy between the two surfaces., finally clamping gently. Clamping too tightly squeezes out too much epoxy and weakens the bond.

Ken noted that no one brand of epoxy is best for all applications. For general use, he usually employs Mas epoxy., which he finds has the greatest tensile strength and cures with greater flexibility.. For oily and tightly grained woods like teak and oak, Ken utilizes a product called G2 (a System 3 product).

For double planked hulls, some restorers argue that a layer of waterproof, flexible “5200″ sealer between the wood layers will provide consistent, waterproof protection for the interior wood layer. The exterior bottom layer can then be treated with traditional bottom paint. This eliminates the nbeed for epoxy entirely.

Les Rue., a former ACBS International president and highly respected “amateur” restorer, with between ten and twenty restorations under his belt, follows the Danenburg method.  (Mr. Danenburg has written a very popular book on wooden boat restoration) When replacing the bottom on a “woody”, Les applies an inner layer of marine plyt, cut to fit, following the curve of the frames. When that layer has been attached with stainless strell or coppere staples, Les coats the exterior play surface with a 3M product called 5200, using a trowel.  (Sikaflex can also be applied in this manner). The 5200 provides a flexible rubber membrane on the underside of the ply layer. Mahogany or cedar boards are then screwed to the frames through the sealant and plywood layer.  Les reports no problems with water penetration through these screw holes. The rubber membrane apparently provides a leak proof barrier.

On the bottom planks, Les applies a very thin penetrating epoxy sealer (Smith’s S1 or CPES are similar products). This protects the outer plank layer from rot. Coats of traditional bottom paint can then be applied to the bottom.

Les believes that a 5200 bottom “rides better” than an epoxied bottom,. It offers some flex and doesn’t make the “slapping sound” against waves that he encounters with a rock-hard epoxy hull. Les has reported no bottom failures or weaknesses in boats up to fifteen years of age treated in this manner.

Well, there you have it, readers. Now that the issue has been decided (as clear as mud) I leave you to draw your own conclusions. For do-it-yourselfers, all of the above techniques are likely worth consideraiton. If a bottom job is done carefully and correctly, you should end up with a “hull-ova boat!

(For further reading on this topic,  check out the “rot doctor” website or search epoxy in wooden boats)